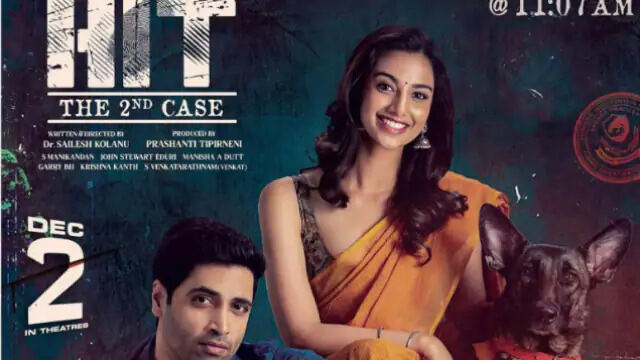 HIT: The Second Case delivers what it promises when it comes to the gore (it is rated A, after all) and taking the HIT universe forward. It just doesn’t seem to do anything to take you by surprise. What it does do however is make you want to watch the next instalment. And maybe, that’s a win.

The film has one interesting episode that keeps the audience interested. It is a suspect’s encounter. This section is handled superbly.Overall, “Hit 2” is a solid investigative thriller that checks all the boxes. Despite its flaws, the film maintains viewer interest throughout. It nearly hits the target.

On the whole, HIT 2 is a gripping crime drama with good thrills and a solid second half. Adivi Sesh is in full form and carries the film on his shoulders with his superb performance. Though the film starts on a slow note, once the momentum picks up it keeps you hooked and ends as a satisfying watch. Go for it.

Overall, Hit 2 is a typical investigative thriller following all the genre troupes. It fails to break any cliches and consistently remains at a decent level throughout. If you like the genre, try it, but have the ‘high’ expectations in check.

The first half proceedings take their own sweet time to establish. If care was taken by him at the scripting stage itself, the result would have been unanimous. To summarize, HIT 2 is a crime thriller that has a straight to the point narrative. Even though the film has a few loopholes, in an overview, it will end up as a easy one-time watch.

Krishna Dev is a police officer, who is assigned to investigate the brutal murder of a woman named Sanjana. Much to KD’s shock, he finds that the serial killer mixed severed multiple body parts of different woman along with Sanjana’s severed head. How does KD nabs the killer and learn about his motives forms the rest of the plot.