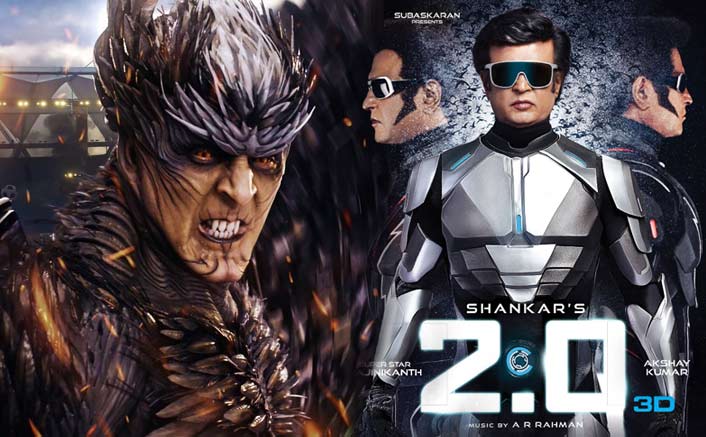 2Point0 is a cinematic marvel… This has style with substance… Director Shankar is a visionary… He hits the ball out of the park this time… Akshay Kumar is FANTASTIC, while Rajinikanth is THE BOSS… SALUTE!

A direct sequel to 2010’s Enthiran (aka Robot), the new film builds on what was promising the last time around and gives us more of it. But plot, story, and character development are sacrificed at the altar of spectacle.Sure 2.0 is mostly humorless and doesn’t have the lightness of touch that it could’ve done with. But the action, the VFX, and the sheer spectacle on display allow me to forgive many of its faults. Shortcomings notwithstanding, it is the victory of vision. Shankar has shown us that slick special effects blockbusters are very much within our grasp.I’m going with three out of five.

Is there such a thing as an over-fertile imagination? What is that tipping point when dazzling becomes exhausting? And how many versions of Superstar Rajinikanth can one film juggle successfully?But what Robot had and what 2.0 lacks is a strong emotional quotient. The first film tackled complex ideas of human emotions and hubris and what happens when the creation turns on the creator. 2.0 is visually overpowering – the VFX are mostly first-rate – but the screenplay doesn’t offer the seamless mix of romance, drama and comedy. Some of the writing is lazy.

Shankar’s direction is phenomenal. He has given the film a grand scale and has made it in a way that people will be blown off their minds with the computer graphics and visual effects, both of which are of international standards. On the whole, 2.0 (dubbed) is a surefire hit and will keep everyone associated with the film as also the audience very happy. It can easily touch the 100-crore mark in the first weekend itself.

2.0 is dull as ditchwater in the first half, perking up a little in the second, with a half-way watchable Akshay, and a Rajini coming into his own right towards the end, for a bit. There are some oh-wow moments, but on the whole, the film is not worth all the sound and fury.Will there be a 3.0? Give that a thought while I deposit my 3D glasses by the door.

There are tons of special effects in Director Shankar’s undoubtedly inferior sequel to Enthiran/Robot — the 2010 sci-fi masala that explored the daredevilry and dangers of man-machine interaction to entertaining results. Except they are so overwhelmingly shoddy, 2.0 ends up looking like a downgraded, cost-cut version of a promising idea. 2.0’s cursory ticking of the downsides in clumsy common man conversations and confusion over ‘all life forms matter’ in an absurd, tiresome climax ensure it remains hidden.

So, is the most expensive Indian film ever mounted worth all the money that has been sunk into it? It looks and sounds great for most parts. It whizzes by thanks to the breathless action and the dazzling VFX. 2.0, however, would have been a greater film had the screenplay dared to go beyond the known tricks of the genre.

On the whole, 2.0 is a cinematic marvel which has the style as well as the substance. The VFX especially during the last 30 minutes is something which has not been watched on Indian screens ever. At the box office, it is a sure shot blockbuster and will set new benchmarks in the days to come. Highly recommended!

What would it be like if the characters from Endhiran find themselves inside the plot of typical Shankar movie? 2.0 is what you would get. Using his pet theme – a wronged individual taking revenge on the people who ruined his life – the director gives us a film that is part sci-fi, part horror, part vigilante movie and part special effects spectacle. The plot of 2.0 feels familiar; in fact too familiar. There is no mystery in the supernatural occurrences that we see on screen

The film, however, falls into the trap of a screenplay that has been tried and tested multiple times and that happens to be the biggest drawback of 2.0. If the presentation of the story was done in a tighter manner, it could have worked better for a certain section of the audience. On the whole, without giving up on Superstar’s swag, Akshay’s performance and his love for spectacularly grand scenes, Shankar presents us with a product that cannot be sidelined. With contemporary touches and technological infusions, 2.0 is a brand that could stand tough against the biggest of Hollywood franchises.

After facing a threat that is beyond the current understanding of science, the Government seeks the help of scientists. Dr. Vaseegaran suggests to assemble Chitti to fight against it.