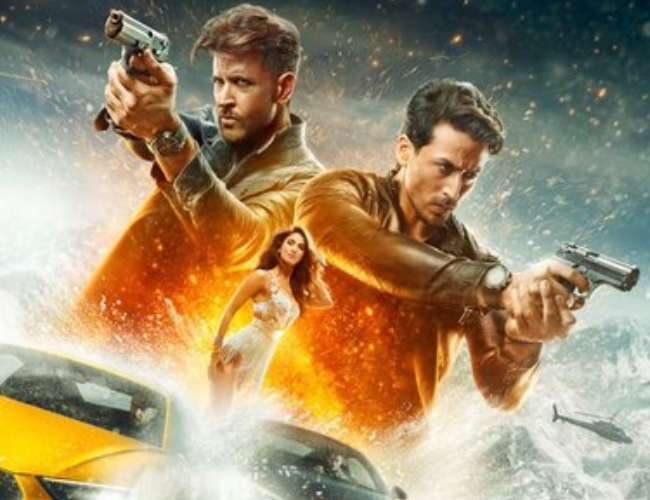 For those that will buy a ticket simply to gawk at the collective handsomeness of its leading men, War gives you your money’s worth. Hrithik Roshan and Tiger Shroff practically burn up the screen when they’re matching steps in synchronized dance numbers, or going brawn for brawn when pitted against each other in fight scenes. Yet you can’t shake off the feeling that any film starring these two talented and genetically blessed movie stars should be smarter and more thrilling that this one that they decided to make.I’m going with two-and-a-half out of five for “War”. It’s too long at 136 minutes. Come on, how much can you take of a beefcake buffet!

On the whole, War is a sureshot hit. It has the magical chemistry of two handsome hunks, their superb action, and an outstanding dance picturised on both of them as its major plus points. The film will join the Rs. 100-crore club in no time; it will also soon become a part of the Rs. 200-crore club. It has the potential to even touch the Rs. 250-crore mark. It will do business at great speed. The film could prove to be the starting of a new franchise for the Yash Raj Films banner.

War isn’t trying for depth but the story isn’t afraid of being slightly more twisty. The film is too long and the post-interval portion sags. In places, the narration gets clumsy – there’s a flashback within a flashback and the songs are force-fitted. In fact, the background music by Sanchit Balhara and Ankit Balhara has more impact than the two songs by Vishal-Shekhar. This is a testosterone-heavy universe – the women, Vaani Kapoor, Soni Razdan, Anupriya Goenka briefly saunter in to provide the emotional centre. But War is very much a bromance which sparkles because Hrithik and Tiger are combative without being competitive. I had a good time. I think you will too.

The chief trouble with War is that all the space is divvied up between Hrithik and Tiger, and they are so busy strutting across the screen, in all their glory, so ripped, so brawny, that the poor baddies don’t really get a chance. Not one scary villain who sends the shivers down our spines? Then the spies might as well be playing ring-around-the-roses with each other.

Like the quintessential entertainer, War serves up a little bit of everything in its narrative — Action, drama, music, romance, exotic locations and car chases. The screenplay makes room for every commercial movie element. In a bid to make it Hollywood-esque, director Siddharth Anand and his team have designed the many stunts of the film to recreate thrills that you’d usually watch in movies like Mission Impossible and Fast And Furious. The relentless action and the dialoguebaazi is entertaining, but the predictable storytelling and the not-so-original screenplay leave a lot to be desired in this desi action flick. On the back of films like Hrithik’s Dhoom 2 and Tiger’s Baaghi 2, War is a decent addition to both actors’ action film legacy. But this high-profile bang bang show is at best, popcorn entertainment for action movie buffs.

Aditya Chopra and Siddharth Anand, who have co-written the plot, want to stimulate and shock the audiences at the same time. And simultaneously infuse the pride of Deshbhakti into our hearts, as if Kumar and Abraham didn’t do it correctly. But hardcore fans of the actors won’t scoff at the idea even for a second. All they wish to do is witness two of the most revered action and dancing sensations together in the same frame. The men do deliver, but the film doesn’t. War’s greatest achievement could be being better than Anand and YRF’s last few offerings. That may be enough to make this a blockbuster!

All said and done, War is a timepass watch and nothing more than that. Hollywood feeds us such movies on a regular basis & if you just want to see how Bollywood has achieved that, go for it. Watch it for the action & style because there’s nothing else to look up to.

WAR begins on a rocking note. The entry sequence of Kabir has a twist and startles viewers. If Kabir’s entry impresses, Khalid’s entry blows one away as it’s a smashing action scene shot in one take. One expects the cat and mouse chase sequence to begin immediately from hereon. But instead, the film goes on a flashback mode to explain the dynamics of Kabir and Khalid’s bond. The mid-air action scene is quite fun while the intermission comes at a decisive point. Post interval, the Hrithik vs Tiger saga begins in full force and makes for a fun watch. The film also gets a bit stretched but the twist in the tale saves the day to an extent. Ideally a film like this should have ended on a high but the finale fight is tedious and too long.On the whole, WAR is a paisa-vasool action entertainer which has style as well as enough twists and turns to keep the viewers engrossed. At the box office, the extended weekend, dazzling action, stunning international locales and stylish execution will ensure mammoth footfalls for the film.

War is finally upon us! The movie comes straight to the point and we are told that Major Kabir (Hrithik) has gone rogue who is killing army officials. His protege Khalid (Tiger) is given the task of chasing him down. So far, we have seen the equation shared between Kabir and Khalid as the first half is mainly a flashback. Hrithik Roshan as Kabir is charismatic and is channelising his inner Mr A (if you know what I mean). There are grey shades to his character, or we are made to believe so. Tiger Shroff, on the other hand, surprises. While he is great in action sequences, it is the dramatic portions where he excels.I also loved the complex dynamic the two share in the film. Having said that, I think I know why Kabir is doing what he is doing and I hope that is not the case here. So far, War is a gripping action fest. Here’s looking forward to the second half.

The biggest action entertainer of the year will see both these incredible action stars push their bodies to the limit to pull off never-seen-before, death-defying action stunts that will keep you on the edge of your seats. War is set to be a visual spectacle for quintessential action cinema lovers as they would witness Hrithik and Tiger pull off jaw-dropping sequences as they try to beat each other.