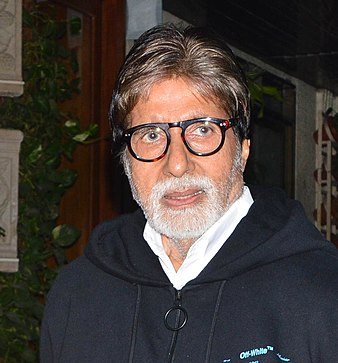 Amitabh Bachhan whose real name is Amitabh Srivastava is one of India’s most famous actors, whose net worth is estimated at $430 million or Rs 3201 Crores in Indian Rupees. He began his career as an actor in the late 1960s and early 70s before becoming famous for playing the role of an angry young man in Hindi cinema. He later became known as “Angry Young Man” for appearing in over 200 movies during his 50-year acting career. He has been called India’s most famous actor for his roles in Bollywood films.

Amitabh currently lives in a bungalow called Jalsa in Mumbai with Abhishek Bachchan and Aishwarya Rai Bachchan he earlier used to live in a bungalow Pratiksha with his parents before their death. He has in total 5 bungalows in Mumbai worth 32 Crores. His Andheri apartment was recently rented by Kriti Sanon at a rent of Rs 10 lakhs per month. His house Jalsa was earlier registered under his brother Ajitabh’s wife’s name for tax avoidance purposes but was later in 2006 registered under Jaya Bachchan’s name. Jalsa was a gift given to him by Ramesh Sippy for Satta pe Satta in lieu of salary. Amitabh Bachchan sold his house Soopan in Gulmohar Park Delhi which was his mother Teji Bachchan’s house for Rs 23 Crore on Feb 3 , 2022.

How much was Amitabh Bachchan’s First Salary

His first salary back in 1962 in a job which he did for Shaw Wallace  before joining film industry was rs 500 per month and after deductions, he used to get rs 460 in hand

How Old is Amitabh Bachchan: Age & Date of Birth?

How tall is Amitabh Bachchan?

How much does Amitabh Bachchan?

Amitabh Bachchan’s father was the famous Indian poet Harivansh Rai Bachchan. He was born on 11 October 1942 in Allahabad, Uttar Pradesh to Harivansh Rai Bachchan and Teji Bachhan. His father Harivansh was from a Kayastha family originating from Awadh while his mother Teji’s ancestors were Punjabi Sikhs who originated from the village of Lyall near Ludhiana in Punjab. He also has a younger brother Ajitabh Bachchan

Amitabh Bachchan Net Worth In Indian Rupees in 2022

Amitabh was initially named Inquilab which meant revolution His father took advice from another poet, Sumitranandan Pant, and changed his son’s name to “Amitabh”, which means “the light that will never die”. Amitabh was heavily influenced by Dilip Kumar, especially with regard to his method acting technique.

Amitabh Bachchan is a famous Indian actor who first gained popularity in the early 1970s for films such as Zanjeer, Deewaar, and Sholay which got him the tag of Angry Young man. He has won numerous accolades in his career, including four National Film Awards as Best Actor, Dadasaheb Phalke Award as a lifetime achievement award, and many awards at international film festivals and award ceremonies.

Amitabh Bachchan is a highly successful Indian actor with a large overseas following of the South Asian diaspora. His films have grossed over $3 billion at the box office worldwide, and he has won numerous awards, including three National Film Awards and fifteen Filmfare Awards.

Amitabh Bachchan is an Indian film actor. He has won numerous awards, including four National Film Awards and fifteen Filmfare Awardsv. He is the most-nominated performer in any major acting category at the Filmfare Awards, with forty-two nominations overall. In addition to his acting career, Bachchan has worked as a television presenter and singer. He made his Hollywood debut in 2013 with The Great Gatsby. He also hosts the Indian version of the game show Who Wants to Be a Millionaire? called Kaun Banega Crorepati