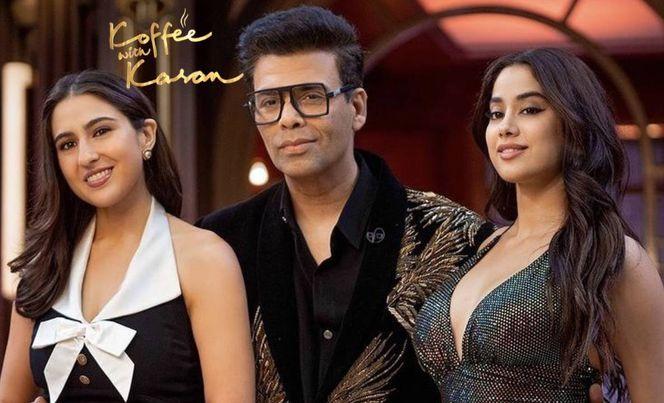 Karan opened the show by saying how friendship in film industry is too shallow and how they all compete for the same brands , movies and boyfriends but yet Sara and Janhvi are such good friends when they are at the same levels at box office. Overall Episode has the vibe of Deepika Padukone , Sonam kapoor episode where they took on ranbir kapoor but Sara and jahnvi were more mature. Sara takes potshots at her ex Kartik Aryan .Sara reveals her crush on Vijay Deverakonda though the way Jhnavi reacted it seemed that Jhanvi was into Vijay and Sara was teasing her. Sara and Jahnvi mention about their personal trip to kedarnath where Sara chose the 6000 Rupees cheaper hotel which had no heater and Janhvi almost froze and when Janhvi challenged Sara to trek to Bhairvanath from kedarnath on a rocky incline and were left hanging and struggling for life. Sara and Janhvi were friends since when both were in USA together and Sara and janhvi went to Disneyland and sara saw them through the lines by saying there is a friend ahead

Sara and Janhvi Kapoor talked about their trip to Kedarnath

Sara and Janhvi made a trip to kedarnath where Janhvi froze with her lips blue and she was wearing all the clothes she had brought because the hotel sara chose was cheaper by 6,000 while the hotel she stayed when shooting was more expensive and was paid by producers.

Sara took multiple potshots at Kartik Aryan and called him everyone’s ex . Karan seemed to enjoy how Kartik was pulled down by Sara.

South hero Vijay who is also doing Dharma ‘s Liger with Ananya Pandey seems to be dating jhanvi thats what it seemed like though it was Sara who took his name as the boy whom she liked. Sara with her openess won the Kofee hamper round and though she didn’t knew her father’s movies or her grandmother’s movies she remembered her mother’s movies

Karan Johar then proceeded to play Bingo game and Janhvi Kapoor then disclosed a few amusing facts. “I’ve gone skinny dipping in a fountain in Uttarakhand, I’ve eaten a snail, and I’ve broken up with someone because they didn’t order me a chicken salad,” she explained. All three turned out to be true. “Janhvi went Nangu in the pool, how you worry about something else,” Sara Ali Khan asked to the Koffee With Karan 7 presenter.

Indian chat programme Koffee with Karan, which is presented by director and celebrity Karan Johar and features celebrities.  The show premiered on November 19, 2004, and has aired seven seasons over the course of eighteen years.