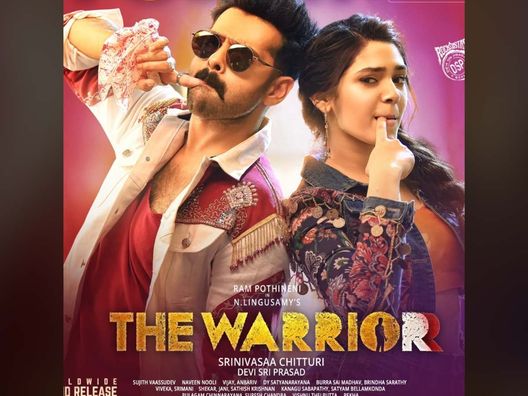 ‘The Warriorr ‘film is a mediocre one. First half of the film works for the masses, second half is not up to the mark.Ram and Aadhi did perform well. Entire movie runs on Satya Vs Guru thread, which turns as the major drawback.

Overall, The Warrior is a routine mass entertainer which has some mass moments working intermittently. But, a weak direction and screenplay play spoilsport. What should have been a cracker of a mass entertainer turns out to be a boring actioner.

On the whole, The Warriorr is a typical masala cop drama that has some impressive mass blocks. Ram and Aadhi Pinisetty hold the screen with their impressive act but the story is a bit routine and predictable. If you are okay with this aspect and like to attempt a mass film, The Warrior can be happily given a shot at a single screen to enjoy the euphoria.

About ‘The Warrior’… An action entertainer with a commercial feel. Ram, Adi Pinishetti’s acting… Kriti Shetty’s glamour… three songs… action episodes… good. The length is longer. Hence, the second half is slow. Linguswamy of yesteryear was not seen as a director. If you go to this movie without any expectations, you can pass the time happily. ‘The Warrior’… for commercial movie lovers!

Satya takes charge as the DSP in Kurnool (in Telugu) / Madurai (in Tamil) and cross paths with a notorious gangster in the city named Guru.