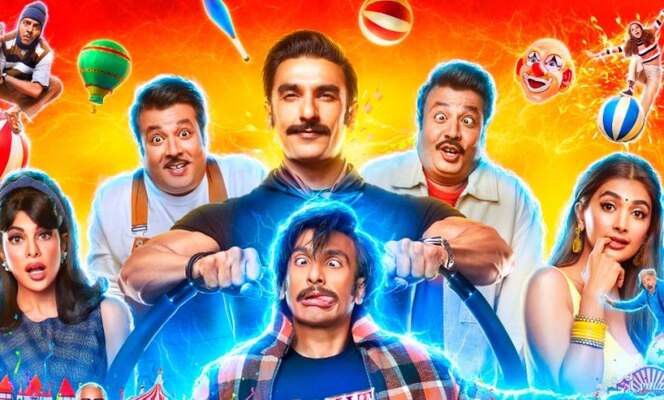 Lacks entertainment and humour you associate with a RohitShetty film… Has some funny moments [second half], but the spark is missing.

On the whole, Cirkus is a poor fare and will not be able to make any mark at the ticket-windows. For its canvas and budget, it will do below-average business at the box-office.

To the already busy plot in Cirkus, director Rohit Shetty & the writers add half a dozen characters, a superhuman ability for one twin to endure electric currents, which somehow transfers to the other twin even though he lives in another town, love interests who crowd the frame without adding much value and a larger philosophical debate about nature versus nurture. Apart from being an oversized entertainer, Cirkus also wants to advocate for tolerance and inclusivity. It’s a noble thought but the film is a mess. I was hoping for a rollicking good time but circus did not deliver to paraphrase DS Eliot and this is the way the year ends not with a bang but a whimper

Cirkus is directed by Rohit Shetty, the man behind some of the most loved big Bollywood entertainers; it stars Ranveer Singh who is one of the finest actors we have in India right now and the film is fit for the festive-holiday season. ‘Tis the season to be jolly! So if you are looking to enjoy a film with the family, with some harmless entertainment this holiday season, Cirkus is for you. Tip: Take the kids and the older folks in the family along for sure.

All said and done, Cirkus is a decent comedy film, which we believe can be a good one-time treat with your friends and family this holiday season. If you are an ardent Ranveer Singh fan, you can certainly give it a go. But you will come out in awe of Sanjay Mishra.

This movie is Rohit Shetty’s sincere attempt to deliver a full-blown entertainer to all Bollywood lovers who enjoy such large-scale experiences. The film feels like a snooze fest at the start. However, slowly as the mystery unfolds, Cirkus takes a hilarious turn post-intermission. The film concludes on an emotional note, with a dash of comedy thrown in for good measure. It also shows a connection to the Golmaal world. If you love Rohit Shetty films and are an ardent Ranveer Singh fan, then this movie will be a good one-time watch for you but if you do not keep your hopes very high.

To note, the screenplay and dialogues prove to be the game changer for Cirkus as without a proper screenplay the movie would have been a disaster. On the other hand, the music of the film gets an average reaction. However, Deepika Padukone’s special number with Ranveer Singh (Current Laga Re) happens turns out to be one of the highlights of the film. Their chemistry in the song was electrifying. While the background score is decent as well, the sound effects were quite impressive for a comedy film. Overall, Cirkus gets 3.5 stars and the extra mark here goes for the fantastic supporting cast who did their well and brought the film to us in a different manner where we can laugh in these hard times.

‘Cirkus’ is a busy film filled with a battery of characters put together with a purpose to make us laugh, but is far from that. Entertaining the audience with slapstick comedy and drama is a tightrope that Rohit Shetty has successfully walked before but this time he seems to have tripped several times along the way.

The issue with Cirkus is that it feels outdated. Not because it’s set in the 60’s, but the formula is cliched, the VFX in some scenes looks amateurish and the music, unlike Shetty’s previous films, is a big downer. There is no harm in making a mindless comedy, but for it to work you need to have some solid writing to back your effort. In Cirkus, the writing is average and the only time the film picks tempo is when the supporting cast delivers. Jacqueline Fernandes and Pooja Hegde have very little to do. Ranveer in this double role gives his best, but is let down by a weak script that doesn’t do justice to his efforts.

After finding two sets of identical twins on the doorstep of his orphanage, Dr. Roy Jamnadas gives them up for adoption to two different families in two different cities. Years later, a comedy of errors ensues when one set of twins decides to visit the city where the other set of twins runs a circus.