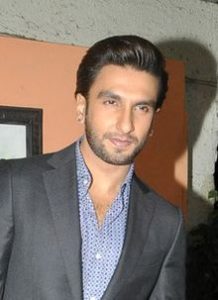 Ranveer Singh whose real name is Ranveer Singh Bhavnani has a net worth of $44 Million or Rs 334 Crores. His source of income is by being a Movie Actor.

Ranveer Singh is married to Deepika Padukone, they got married on 14 November 2018. Ranveer and Deepika are considered a power couple and

Ranveer & Deepika have a combined net worth of $89 Million or Rs 675 Crores in Indian rupees. Ranveer Singh and Deepika Padukone are considered a power couple of Bollywood

How Old is Ranveer Singh: Age & Date of Birth?

How tall is Ranveer Singh?

How much does Ranveer Singh Weight?

How did Ranveer Singh get famous?

Ranveer Singh is famous for his Bollywood movies.

What does Ranveer Singh do For a Living?

How rich is Ranveer Singh?

Does Ranveer Singh Have a Production House?

Ranveer Singh Assets / House / Car: How Does he spend his money?

Ranveer Singh is one of the most promising Actors in Bollywood soon he will be one highest-paid actor in India.

What Is the cost of Ranveer Singh’s Worli Apartment?

How Ranveer Singh Makes Money and grew his Assets: Breakdown

As per Forbes Ranveer Singh made Rs 64.2 Crores in 2017, 84.62 Crores in 2018, and Rs 118.2 Crores in 2019 thus ranking at number 7 on their celebrity list he has been on their Forbes India celebrity 100 lists since 2012. He endorses multiple brands and charges 20-25 Lakh per ads and lots of brands use him to promote themselves during the IPL and Cricket World cup. On Social media, he charges Rs 10 lakh per promotion. He charges 12 Crore + commission on profits and he earned Rs 25 Crores from his mega success of Simmba. In 2018 his brand value was assessed by Duff & Phelps to be $63 Million the 4th highest amongst Indian celebrities.

Ranveer Singh Has only four major controversies first he was criticized a lot for AIB Roast. One of the biggest controversies of Durex condom advertisement. One of the most talked-about Controversy is Paid Debut: Everyone liked Ranveer for his debut in Band Baaja Baarat and he proved himself with his great performance in many movies but still, there were media speculations that came out suggesting that he actually paid the producers with the help of his businessman dad to earn a debut in Bollywood.In 2022 he did a nude photoshoot which led an FIR being filed against him.

Ranveer Singh charges per brand endorsement Rs 7 to 12 crore annually. He has endorsed around 34 brands these are some of the main brands endorsed by Ranveer Singh: MakeMyTrip, Ching’s Secret, Thumps Up, Xiaomi India, JBL, Kotak Mahindra Bank, Jack And Jones, Maruti Suzuki, Lloyd, Bingo, Crypto brand Coin switch among others.

Ranveer Singh was born on 6 July 1985 (age 38 years). Ranveer Singh was born in a Sindhi family in suburban Mumbai and his family background is not from the film industry.  He used to think that getting a break in the film industry is too tough so he went to Indiana University USA and got a creative writing degree. Initially, in 2007 he started his career by working with ad agencies, then he started to work as an assistant director post that he switched to acting and started sending his portfolios to various directors. Ranveer Singh got his break and started his film career in 2010 as a Bollywood actor with the Band Baaja Baraat whose casting director and producer Aditya Chopra liked him. Ranveer Singh has done 20 movies in his 10 years of Bollywood career. He started dating Deepika Padukone in 2012 and married her in 2018.

Ranveer Singh started his career in 2010 with his debut film Band Baja Barat as a Bittu Sharma. the movie did well on the box-office as well and overnight he became the heartthrob of India He followed it up with movies like Ladies vs Ricky Bahl and Kill Dil. Ranveer Singh is famous for his role as Bajirao. When Ranveer was cast by Sanjay Leela Bhansali in his Ram Leela he got his first 100 Crore grosser. Ranveer got further success with 2015’s Bajirao Mastani and then 2018’s success with Padmavaat and then his first 200 Crore grosser with Rohit Shetty’s Simmba which has solidified his status as a top league star in Bollywood. His work with Sanjay Leela Bhansali has got him a lot of critical acclaim as well as box office success. He has received two Filmfare awards for best actor for Gully Boy and Bajirao Mastani as well as critic award for Padmavat. In 2021 he also started hosting the Colors show Big Picture