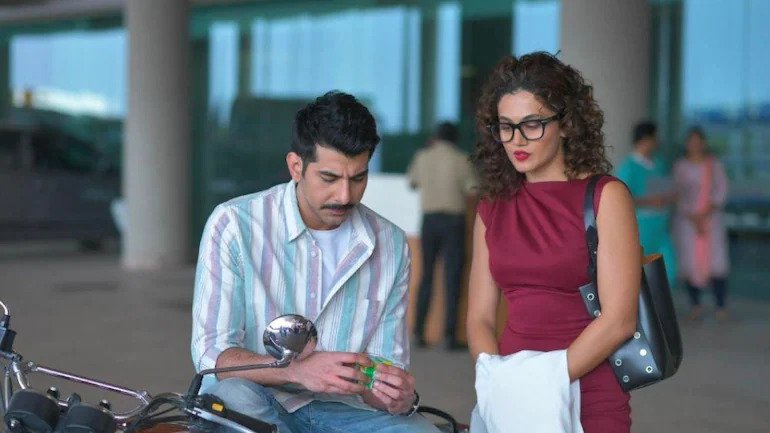 Nihit bhave who’s written the adapted screenplay attempts to weave many threads into the narrative there’s parallel universes and varied timelines within those universes there’s murder, flawed marriages, infidelity and no surprise that this proves to be an impossible task the plot is fantastical and convoluted and the only way it can work is if the characters and the emotions are strong enough to make us invest in it which doesn’t happen

On the whole, Dobaaraa is a very novel film with only limited class appeal. It would be liked by just the city audiences who frequent high-end multiplexes. Masses would not relate to the drama at all. Nevertheless, it is a bold and different attempt — and a well-made one at that.

The smartly lensed Dobaaraa isn’t always electrifying, but it is consistently entertaining and engaging. It blends the fallout of the space-time continuum gone awry with the far simpler conventions of a crime thriller. Anurag Kashyap gets much of it right even when the going isn’t entirely smooth.

Dobaaraa is a good film, but it has an OTT feel to it. Maybe skipping a theatrical release would have been a better option for the makers.

Some puzzles draw you in with their smartness and intricacy. I haven’t seen the original, so I can’t comment on how ‘Mirage’ meshes its many strands, but ‘Dobaaraa’ comes off too choppy and muddled. It’s hard to keep track of the many things happening in the time zones the movie slips in and out of; the characters keep going off on tangents, the intrigue goes missing, and the film flattens.

Dobaaraa is a mad and whacky tale. It has the good ingredients of Looop Lapeta, and is edge-of-the seat as a thriller. The film keeps you hooked, and thoroughly engaged, even with the constant back and forth in time. This one is a good watch in theatres, so do not miss out on it!

All in all, Dobaaraa is a well-thought-out story that has many layers. It is the kind of film that will have the audience putting together a jigsaw puzzle as they leave the theatres. And when they’ve done so, they’ll realise that Dobaaraa is just another level. Bollywood’s tryst with time travel and the parallel universe has been successful with this film.

Dobaaraa is an engaging thriller which is worth your time but do ensure that you don’t spend too much time munching the popcorn, lest you miss the beat. This one needs all your attention, so go dive in!

A woman gets an opportunity to save the life of a 12-year-old boy who witnessed a death during a thunderstorm that happened 25 years ago, by getting connected through the television set during a similar storm in the present.