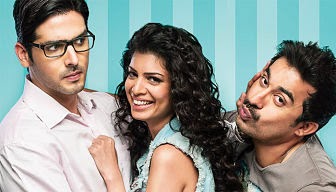 Prithvi’s girlfriend (Tina), not entirely relevant throughout, wears a perpetually aggressive expression, like she’s trying to figure out the mechanics of this screenplay. Though it is written with a fair amount of conviction and research, the paper-to-screen transition adds nothing new. There isn’t enough within sequences—be it the performers, their lines or routines—to keep us engaged.

On the whole, Sharafat Gayi Tel Lene entertains only in parts and, given the very poor initial, it will fail to make a mark at the box-office.

A fairly smart script, cast that’s easy on the eye and it wouldn’t have been so tough to bring out a decent film. But unfortunately, director Gurmmeet Singh falters and what we get is a film that is sometimes perky, but mostly sloven and at times, plain boring.The best thing about this film is its short duration. Otherwise, it is just a huge disappointment.

Even though the film’s director Gurmmeet Singh has tried his level best to weave a story spanning the life of a middle class working professional, the essence of the same still seems to be lost in transit. The medium paced first half of the film is followed by the fast moving second half which also provides fodder to many an unearthing. Gurmmeet could have tightened the directorial noose a bit more than the existing (esp. in the climax, when the plot’s secret is revealed). This definitely could have added spice to the drama. On the whole, SHARAFAT GAYI TEL LENE is a strictly average film.

Director Gurmeet Singh has done an average job with the star cast and the script of the film. The short duration of the film works its favour as it keeps it crisp and to the point. If you are looking for a concoction of action, romance and humour in small dozes, then the Sharafat Gayi Tel Lene is a perfect average time pass for you.

The film takes on the theme of greed and covetousness and turns it into a pleasant satire. A saucy comedy about a commoner’s brush with the “D” gang, this is an original smile-inducing romp into the realm of comedy where errors define the mood, and the characters are not as interesting as the situations that the script tries to create for them. This is certainly funnier film than any other comedy this week.