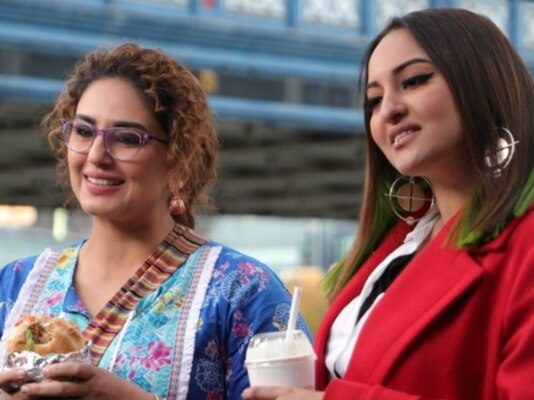 On the whole, Double XL is an ordinary entertainer but with bleak box-office chances because getting the audience into the cinemas will prove to be an uphill task.

Double XL has the right intentions and does its best to convey them, but it gets lost in translation at more than a few places, owing to the length and shoddy plotting. An important film that makes for a slightly decent watch, but needed to be better. I’m going with 2.5 out of 5 stars.

Between shrieky humour, overstated emotions and done-to-death bouts of London tourism, Double XL plods to kickstart the actual discussion behind this exercise. Obesity, especially triggered by health reasons or hormones, can be a harrowing time for the individual in its grip. But Rajshri and Saira are shown as unapologetic stress-eaters. They binge on junk food, consciously pile on the kilos, carp about it too yet look perfectly comfortable in their flab and fashionable wardrobe. Double XL completely sidesteps the health point of view.

As a concept, Double XL is refreshing and relevant. It sure takes guts on the part of the makers and the actors to weave a story around the subject. However, mediocre writing and average execution scales down the film’s original potential.

However, I don’t think you need to watch the whole film to realise the ending because the film is that damn predictable. The cliche-ridden script, which plays on the stereotype of women tackling not only the issues of their size but also fighting for their dreams, is something you might have watched even in a YouTube skit at this point. The big screen offers an opportunity to delve deeper into the issues but director Satram Ramani doesn’t seem to be wanting to go beyond just scratching the surface. The film is based on ‘happy coincidences’ that take place a little too often for the women.

Double XL wants to tell us that size or shape doesn’t matter, it is who you are on the inside that does. Such a refreshing premise, backed by two leading ladies who appear confident in their skin, and their flesh. More so, given how size zero has been celebrated by Bollywood, and how the possession of washboard abs has been made to stand in for talent. But sadly, what a badly done movie.

The sentiment of the filmmaker is to encourage women to embrace their bodies irrespective of the size, frame, and to self-love to free themselves from the shackles of social stigma. Unfortunately, this task feels half-baked and a bit of a misfire in the attempt to give the film a tone of commercial acceptance. As the makers tried to appeal to a wider audience, the script feels diluted, layered with punches, too many songs and jokes that distract you from the main topic.

Double XL, with its one-size-fits-all approach, translates into more than just double trouble. It makes a terrible hash of a story of two victims of body-shaming who learn to take all swipes on the chin and fight on to prove to the world that the clothes that fit them do not define who they are. It wants to make a lofty statement. All it manages to be is a flimsy 130-minute film that says what it has to all within the first ten minutes. The rest is mere padding.

The journey of two plus-size women Rajshree Trivedi from Meerut and Saira Khanna from New Delhi as they navigate society’s beauty standards.