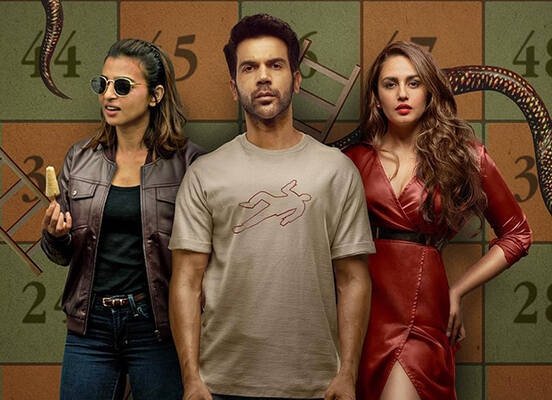 Monica, O My Darling is directed by Vasan Bala who uses the phrase Monica, O My Darling and the song as scaffolding for a twisted tale of lust, blackmail, murder, greed, jealousy, class conflict, and corruption. The Plot becomes increasingly convoluted and anything is possible. Jayant’s life is essentially Snakes and Ladders every Ascent is accompanied by a bigger fall Beyond a point the game loses its thrill perhaps also because most of the enjoyable characters are bumped off one by one still Watson infuses the film with enough gleeful criminality to keep it humming

At first, the sudden twists are enjoyable but after a point, as more characters are thrown into the mix, the screenplay starts losing pace. The plot twists become more bizarre and unconvincing and as you wait for the big reveal, even the unpredictability begins to fade. Before the last act, one can quite easily comprehend the finale and now it’s just about getting it over with.

Based on the novel Burutasu No Shinzou by Japanese author Keigo Higashino (whose Devotion of Suspect X adaptation by Sujoy Ghosh is already underway), Monica, O My Darling’s neo-noir gets its grim kicks out of ruthless go-getters, master manipulators, underhanded perpetrators, entitled elites and slithery opportunists.Dig deeper and an allegory for classism is still waiting to be discovered, but for Monica, O My Darling, anticipation is far more rewarding than arrival.

There are two ways of interpreting director Vasan Bala’s Monica, O My Darling. You could view it somewhat literally as yet another suspense drama in which matters go out of the hands of the conspirators in a crime and spiral so completely out of their control that they are left chasing a murderer as much as being chased under suspicion for their own role in the plan gone awry. Or you could view it as a tribute to and a spoof of noir thrillers at large. It’s fun to see it as both

On the whole, MONICA O MY DARLING works due to the exceptional performances, tight script, unpredictable twists, retro-style music and taut direction. However, the film suffers a bit due to a comparatively weaker second half.

Every time things slowed down, I would stifle impatience, but then they would leap up again, and it would be fine. On the whole, and despite those slow spots, and a few twists which we figure long before the characters do, with a cracker of a beginning and an end which slithers in most unexpectedly, ‘Monica’ ends up being a fun watch.

In summary, Monica O My Darling is an intriguing story set in a delicious pulpy universe with a great cast. With a tighter edit and a more concise story, the film would’ve been almost impossible to put down (but even as it stands, it’s a fun watch).

For the Netflix release Monica, O My Darling, the filmmaker has at his disposal a fabulous cast up for all manner of mischief and the opportunity to leap from cutting-edge technology to oozy pulp over the span of 129 minutes. The Netflix release has a lot of fun snaking this way and that, even though the joke might sometimes be lost on viewers.

A young man desperately tries to make it big with some unlikely allies and a dastardly diabolical plan to pull off the perfect murder.

Failed to Release in Theaters