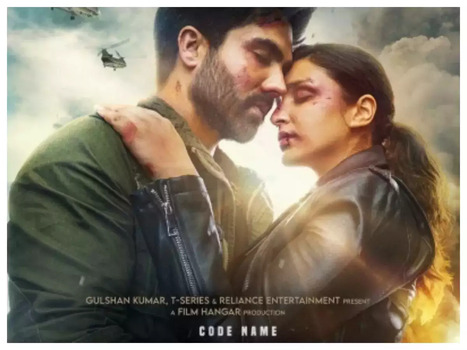 Ribhu Dasgupta has written a routine story which doesn’t quite involve or engage the audience. His screenplay moves on the beaten path. Consequently, the drama becomes predictable and also quite boring. Several points in the drama are revealed much after their first references, irritating the viewers in the process. Had the drama been engaging, the audiences would not have gotten irritated at the late revelations, but because the screenplay is hackneyed, such suspense angles don’t go down well with them.On the whole, Code Name Tiranga is a flop show all the way.

Harrdy Sandhu, in the guise of a self-effacing, mild-mannered man, may seem like an ideal foil to a girl of incessant action but he is hamstrung by sketchy characterisation. As for the other actors in the cast, Code Name Tiranga will certainly not go down as a memorable outing. The film waves a flag that flaps and flutters without much purpose.

The only way you can wade through Code Name Tiranga is to swing between disbelief and boredom. But first, a question. Can you swallow Parineeti Chopra being the kind of deadly Indian agent who is able to handle a dozen and more gun-laden terrorists and their dangerous mastermind all on her ownsome? Like single-handedly? In that case, this film is for you.

Ribhu Dasgupta’s post The Girl On The Train is back with this, which makes the Netflix film looks like it could win an Oscar. The formula has things from Baby, Ek Tha Tiger, Naam Shabana, Tiger Zinda Hai etc. but it comes nowhere near to them as far as the execution of the plot is concerned.All said and done, Parineeti Chopra’s Code Name: Tiranga is one of those films which you watch & tell no one about.

All in all, despite Parineeti’s overuse of heavy-duty dialogues, Code Name: Tiranga falls short of eliciting the desired adrenaline rush. Despite the story’s lack of substance, Parineeti delivers a powerful performance in this predictable action thriller.

‘Code Name: Tiranga’ is an interesting mix of the familiar with the unfamiliar. It is conventional although with some nuances but it mostly conforms to the formula film structure of this genre.

Even though it falls short of being a satisfying spy thriller despite having a few unexpected twists and turns, Code Name: Tiranga can certainly be watched once, solely for Parineeti Chopra’s bravado act.

There’s a scene in the film where Parineeti Chopra’s character describes her life as ‘ghaavo ka guchcha’. The same holds true for this espionage thriller as well. A film which is supposed to be high on patriotism and action ends up as a done-to-death vendetta story that barely has any thrills. We give 2 stars out of 5 to Parineeti Chopra-Harrdy Sandhu’s Code Name: Tiranga.

A RAW agent, is on a journey across many countries. As a spy, she is on an unfaltering and fearless mission for her nation in a race against time where sacrifice is her only choice.