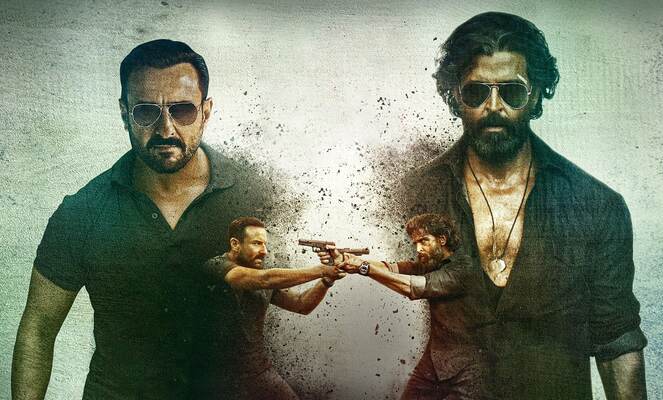 Engaging. Engrossing. Entertaining… Smartly-written, brilliantly executed… VV has it all: style, substance, suspense STRONGLY RECOMMENDED.Take a bow, PushkarGayatri… The simple plot is garnished with unpredictable twists, also the confrontations are superb… Would like to make a special mention of the electrifying background score and raw and sharp action sequences of VikramVedha

Pushkar-Gayatri have based their story on the age-old story of Vikram-Vetal. The interesting story has several layers and the way in which layer after layer is revealed is very good. Pushkar-Gayatri’s screenplay is quite unusual in that sense, making even regular or usual scenes appear novel.On the whole, Vikram Vedha is a winner. In spite of its high cost, it will prove to be a paying proposal for all concerned.

How much you enjoy Vikram Vedha starring Hrithik Roshan & Saif Ali Khan is directly dependent on how much you have already enjoyed Vikram Vedha. If lIke me you are lover of 2017 Tamil version of Vikram Vedha than the hindi version becomes a largely labourious retread but if you are a Vikram Vedha Virgin you will enjoy the puzzle like plot.The Trouble is that original that they wrote was so good that there is no room for improvement so the hindi version is mostly scene to scene replica. I returned from theater a little exhausted and hoping Pushkar and Gayatri soon return to being original.

If you are among those that have seen the Tamil-language original, be warned that this is by and large a scene-by-scene, line-by-line reiteration that is 20 minutes longer than the Madhavan-Vijay Sethupathi starrer. The film’s ability to startle and shock is therefore severely curtailed. But if you are unaware of the plot, Vikram Vedha has enough twists and turns to hold your attention all the way through.

I hope this collaboration of North and South is not just a flash in the pan, because if there’s anything that can save Bollywood right now, it is this confluence of talents streaming in from across the Vindhyas. Pushkar-Gayatri are passionate story-tellers who clearly love what they do: can’t wait for their next.

Although a great film experience, Vikram Vedha has its share of flaws. The film felt imbalanced when divided into two halves. Despite its flaws, Vikram Vedha is a massy film that serves as a fun single-screen theatre experience. I’d suggest caving into Pushkar and Gayathri’s make-believe world and joining Vikram and Vedha’s cat and mouse chase.

To sum up, Pushkar-Gayathri, the writer-directors of the film, have pretty much stuck to the blue-print they created for the original, including the way they weave in the elements of folklore in it. It’s a plus that they haven’t changed the roadmap too much. But they’ve also not tried revisiting the elements that they had at hand to make the redux better than the original. And yet, this one’s worth a ride to the big screen.

Vikram Vedha is no ordinary cop-goon chase film. There are multiple layers and peripheral characters that contribute a lot to making the film a terrific watch. Vikram Vedha is unapologetically massy. It’s also a lot of fun, and with two rock-solid performers like Hrithik and Saif, the film hits the bull’s eye with ease.

It brings back the lost ‘heroism’ in Bollywood! Not only because it brings 2 great actors together but also how they’re shown together to make you feel like Bollywood has gone nowhere & you just were diverted by some keyboard warriors.Pushkar & Gayathri step up with the Hindi version retaining all the mass masala and adding multiple layers of technical bravura over it.

There is sophistication in the manner the directors unfurl their story, making it a film for a cross section of audiences, the multiplex and the single screen, the young and their families, as there’s neither crudity in the dialogues nor voyeurism in the visuals. But it is not a perfect film.And lastly, it is so word-heavy in places that you don’t grasp all of it. Perhaps a repeat audience might just go back to see what it didn’t get the first time around.

Vikram is an honest police inspector, who seeks to apprehend Vedha, a dreaded gangster. When Vedha surrenders, Vikram’s perception of good and evil begins to change when Vedha narrates three stories to him.This is the Hindi remake of 2017’s Tamil film with the same name & same team