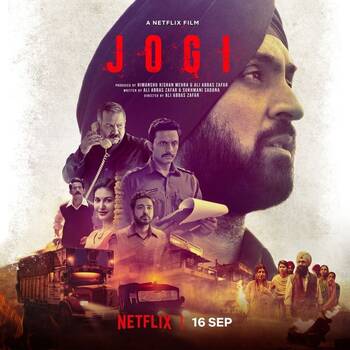 Ali Abbas Zafar and Sukhmani Sadana have written a very sensitive and exciting tale of how a brave Sikh risks his own life to save the lives of his brethren. The story captures the audience’s attention because it is a sensitive human drama. On the whole, Jogi is an entertaining and sensitive drama which will be liked by viewers.

It is not that we can ever forget those days, whose consequences we are still living with. But there does need to be a greater awareness and sensitivity when filmmakers touch upon the still-warm embers of those memories. In the way ‘Jogi’ uses Bollywoodian melodrama as its chief operating instrument, it serves only to undercut the tragedy, making it less than it was.

Jogi — out now on Netflix — is an intense and moving drama set against the backdrop of the 1984 anti-Sikh riots. While the film features fictional characters, it feels realistic as the narrative manages to highlight the human cost of the tragedy.To sum up, Jogi is a bold and effective attempt from Ali Abbas Zafar that bears testimony to the Sultan director’s range as a storyteller.

With intricate writing and high-impact performances, ‘Jogi’ conjures strong feelings of finding hope in the midst of devastation and tragedy. This heart-moving tale of humanity and friendship will leave you with a heart full of emotions.

Ali Abbas Zafar’s Jogi – with Diljit Dosanjh playing the titular role – takes a segment out of the bloody riots to give us an emotion-driven story of how three friends from different faiths help dozens of Sikhs escape Delhi, before order was restored by the Indian Army. It is no secret why the military forces were not called in earlier and which could have prevented so many deaths and so much destruction.

Jogi is, by all reckoning, a missed opportunity. It fritters away the chance to be an explosive tale of friendship and humanity in a city torn asunder. The film gets all tangled up as it seeks to balance the intrinsic power of the narrative material and the need to present it to an audience with all its complexities weeded out. What’s left is a near-empty shell.

On the whole, JOGI tells a moving tale in a sensitive and yet mainstream manner and rests on the brilliant performance of Diljit Dosanjh. However, the weak second half dilutes the impact to an extent.

All said and done, Jogi narrates a heart-paining incident highlighting the personal journey of an individual getting impacted by the manufactured chaos, that disrupted the multicultural fabric of the society.

Amid tension in 1980s India, three friends of different faiths unite in a noble yet dangerous effort to save hundreds in their town.

Failed to Release in Theaters Straight to Netflix release.