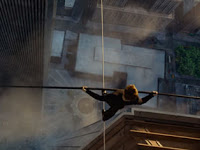 Petit’s extraordinary story was also the subject of the Oscar-winning documentary Man on Wire, whose slick blend of archival footage, still photographs, dramatic re-enactments and interviews made it an incredibly compelling watch. The only thing missing in that film was video footage of the actual walk itself.Although recreated, it’s the piece de resistance of Zemeckis’ film.I’m going with three-and-a-half out of five for The Walk.

There are plenty of reasons as to why you could watch this film. For one, the climax of the movie – the high wire act itself that is a culmination of all the meticulous planning that preceded it – is worth the ticket price alone. You will find yourself gripping the armrests, anxiously hoping that Philippe Petit’s (Gordon-Levitt) act doesn’t end up in tragedy. And on the other hand, the film might prove to be a little nerve-wracking if vertigo means more to you than an Alfred Hitchcock movie name

In paying tribute to that accomplishment, Zemeckis has also matched it. He has used all his brazenness and skill to make something that, once it leaves the ground, defies, not only gravity, but time, as well.The Walk is rated PG (Some material may not be suitable for children). It condones trespassing, disregard for authority and neglect of personal safety. Your kids will love it.

But you can’t help comparing this film to the 2008 documentary ‘Man On Wire’ featuring the man himself. That one, based on Petit’s book ‘To Reach The Clouds’ is all verite, all tight, with not one wasted moment. This new one is a somewhat hokey representation of that truth, but oh, that jaw-dropping walk. Like the unbelievably fearless Petit, at this high point, you feel you are soaring, weightless, high above the world.

For those who know the Twin Towers only as crumbled tombstones made of smoke and tragedy, The Walk is a tour of those buildings as they were originally and as they were meant to be. To see them up close, watch The Walk. But to know what the madness and passion they inspired, find a DVD of Man on Wire.

Must-watch! The Walk is not just an inspiring story but also a visual treat. Rarely do you experience such tales and Robert Zemeckis traverses you right into Philippe’s story as it happens. You feel like an eye-witness for the historic feat. The Walk is not just a film, it’s an experience. The gripping film will give you the chills as it takes you to the top of the twin towers for a never-seen-before journey. I am going with a 4/5 for the film.

On the whole, The Walk provides entertainment of the highest order with constant adrenaline pumping moments and it sure lives up to the ‘unlike anything you’ve seen before tag’ that it carries. Robert Zemeckis has added another priceless jewel to his crown.

Synopsis:As a boy, Philippe Petit dreams of performing daring feats for dazzled crowds. As an adult (Joseph Gordon-Levitt), his life’s ambition comes true when he becomes a high-wire artist who stares death in the face with every step. Under the guidance of mentor Papa Rudy, the daredevil devises a plan to walk on a tightrope attached to the north and south towers of the World Trade Center. With help from his team and against all odds, Petit attempts the seemingly impossible stunt on Aug. 7, 1974