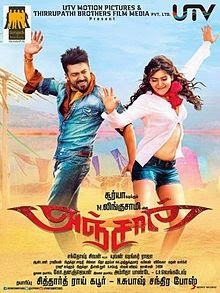 When a film announces loud and clear all that it wants to do is be in service of its hero, and make him as larger than life as possible, we accept it and all that we expect from it is to entertain us. But when it takes almost three hours to narrate its all-too familiar story with easily predictable twists and underwritten characters in a non-engaging fashion, it becomes a painful watch. And, Anjaan is just that

Visit Site for more
Ratings:2/5 Review By:  Review Board  Site:Behindwoods

Anjaan takes its own sweet time to start and wrap. Though not much time is spent on how Raju and Chandru became a name to be feared, the Raju Bhai phenomenon is given the typical cliched hype almost till the second half. The predictable climax makes the whole product less impactful. One palpable connect towards the denouement is a life saver. Anjaan goes to the list of, ‘Could have been better’ movies. Verdict: Suriya and Anjaan, let down by the screenplay!

In the age of variety its amusing to see the kind of henchmen clad in suits, kidnapping the heroine to a broken brickland, repetitive dialogues, monotonous threats, stereotypical villains, abrupt song placements and why Soori? Why Bramanandam?, and finally the length. Looking back at the film, Lingusamy has a lot in store to take back as his homework, for the movie fails to impress you as a whole. To sum up, Anjaan would be in the list of movies that could have been etched better. Barring a few twists and turns, does entertain Suriya fans to an extent and leaves out the rest. Verdict : A commercial entertainer might not go beyond Suriya’s fan base!

Suriya is the saving grace in otherwise a slow moving film. Vidyut has a meaty role and he is ok. One of the major drawbacks of the film is its length, nearly 3 hours. It needs urgent trimming to make it racier.On the whole, Anjaan is for those who seek unabashed entertainment and relish masala films.

The first half runs away with an interesting intro, the supercute Samantha and some neatly made action sequences. Lingusamy’s trump card is played at the interval scene, which brings out what he is truly capable of. The stage is set for a fast and furious second half. But to everybody’s disappointment, it doesn’t end up being what it intended to and finishes off at the cliff of a pit.Anjaan is not a bad film. I’m just sad that hasn’t turned out to be the film it could have been. Suriya carries this on his shoulders just like he always does, but you do need some help from the others if you wish to churn out a stellar product. The don here is dapper, but his story? Good. And that’s about it.

The story is set against the familiar backdrop of Mumbai. Lingusamy’s attempt to create a “Badshah” out of Suriya has missed the mark. The story revolves around ‘Raju bhai’ played by Suriya who commands respect and fear in equal measures among the people of Mumbai. This half-baked don tale supposedly loaded with twists, turns, loyalty, treachery, risky action sequences ends up being a stale affair due to poor screenplay. Lingusamy’s writing is a big let-down with scenes and twists along predictable lines. The writing department and script are weak while punch dialogues may evoke unintentional laughter 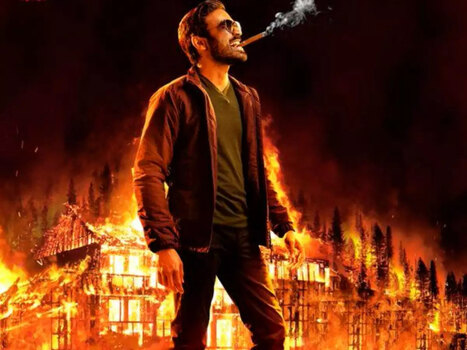