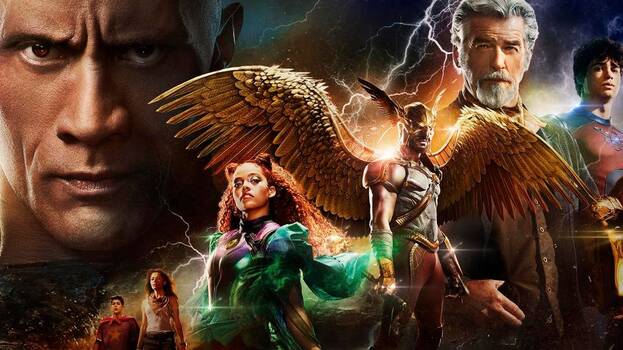 Since there have been several superhero films with similar plot lines, the drama doesn’t offer much newness. However, the spectacular scale of the film and the stunts and action scenes keep the audience engrossed. Dialogues are alright but the comic flavour in the Hindi dialogues doesn’t come through at quite a few places. As a result, the comedy falls quite flat on its face.On the whole, Black Adam is a fair entertainer.

Even if one sits on the edge of the seat, the thrill gets exhausting after a point. There are too many tracks to keep track of. When you think the movie is making way for a sequel, perhaps, another subplot begins. The scenes sans these are a bit dull. Rolling Stones’s ‘Paint it Black’ with slow-motion scenes and explosions while introducing Black Adam and Lorne Balfe’s music are used well.’Black Adam’ is a one-time-watch, especially for Dwayne Johnson and the jaw-dropping visuals and action sequences.

What goes up, comes down. That may not be something worth repeating, but not when it comes to Black Adam. Its flying men – and there are just too many of them – love to go zooming up and then either chucking people down or each other. It’s not even funny the first time round. By the end, it’s just painful. The thing is, Black Adam isn’t all bad though. It’s fairly entertaining, despite all the smashing and bashing; surprisingly cohesive.Since Black Adam is an origin story, this instalment is clearly just a trailer into all the fighting and smashing that is yet to come. That’s an exhausting thought.

Bottom line: Despite its flaws, Black Adam makes for a good one-time watch. The film adds colour to the otherwise dark DCEU, steering the universe towards a more Marvel Cinematic Universe way. The film ends on a high note with its post-credit scene which somewhat makes up for its rushed approach to telling the tale.

Decidedly darker in intent and actions, Thet Adam aka Black Adam alternates between murderous menace and unlikely hero after an archaeologist single mum and her skateboard pro teen son implore him to come to their people’s rescue.It all comes down to Dwayne Johnson. He’s a one-man show, a larger-than-life entertainer you just cannot look away from. Black Adam’s true superpower is Johnson’s likeability. He’s good even when he’s bad.

He’s effortless when it comes to action sequences, but when you see him throwing off men and tearing apart limbs after every five minutes, it gets a little exhausting. The CGI and VFX of Black Adam without any surprises are impressive. And so is the music and background score. From Rolling Stones’ ‘Paint It, Black’ to Ennio Morricone’s ‘The Good, the Bad and the Ugly: The Trio’ and Kanye West’s ‘Power’, all these seem to be fabricated for this film solely. But a film that can only be appreciated by fans, how will it draw a new audience?

Do we need another superhero with another convoluted origin story that stretches back thousands of years and fulfills a whacko destiny? Do we really need another clutch of secondary level heroes to muddy focus? We’re almost 40 deep into the Marvel Cinematic Universe and a dozen in the DC universe. You can almost smell the fumes now, can’t you? ‘Black Adam’ isn’t bad, it’s just predictable and color-by-numbers, stealing from other films like an intellectual property super-villain

In this, the age of superhero storytelling, Black Adam represents the very worst of it. A generic, vague, bloated blur of VFX, with little sense of character, craft, or creativity. At one point in the film, a key character is put into “suspended animation” – a barely conscious state of being where you’re unaware of your surroundings and are kept just about functional. A fitting metaphor, I think, for the experience of sitting through Black Adam.

In ancient Kahndaq, Teth Adam was bestowed the almighty powers of the gods. After using these powers for vengeance, he was imprisoned, becoming Black Adam. Nearly 5,000 years have passed, and Black Adam has gone from man to myth to legend. Now free, his unique form of justice, born out of rage, is challenged by modern-day heroes who form the Justice Society: Hawkman, Dr. Fate, Atom Smasher and Cyclone.