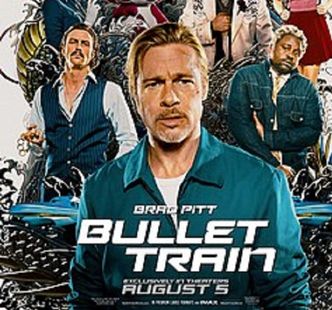 The camera work and well-choreographed stylised action (knives, guns, poison, swords, fistfights, et al) keep you glued to your seat. With the story pretty much staying constant, Bullet Train does feel like it takes a bit longer to reach Kyoto than you’d expect. But you enjoy every bit of this deliberately daft and twisty ride even as you await the final destination. This isn’t a great piece of cinema or anything but it doesn’t pretend to be one either. It sets out to be an absurdly funny, unpretentious crime comedy and it totally lives up to that hype. You will love the random cameos, too!

Aware of his charm, and playing it for laughs, Pitt lightens the film every time he is on screen. It’s a star who is embracing his age, and the reading glasses he now needs, and the therapist whose pithy platitudes he has taken to mouthing, but he is a star all right. Which means that his ageing eyes may be only human like the rest of us, but not his unbreakable body, and that the bullet train, with its dizzying array of cars, stands no chance.Refreshing as that statement is, the film is hardly so. We have seen this train leave the station.

Bullet Train plays an ode to the 90’s action films and the way it’s shot will also remind you of Tarantino’s cult classic, Kill Bill. The jokes are sometimes flat, but the pace with which the characters make their U-turns keeps you guessing and compensates for the lack of better writing. Bullet Train is a fun ride, one definitely worth embarking on. Don’t forget to wear a seat belt though, because you don’t know what’s coming for you!

Although David Leitch has done just a handful of films, the director has time and again proved that he can deliver an entertainer at the box office. Bullet Train is no different. The Deadpool 2 director adapts the Japanese novel Maria Beetle (published as Bullet Train in English) for the big screen and puts Brad Pitt in the driver’s seat. It is evident that both, the director and the Academy Award winner, had a ball making the film.Bottom line: Bullet Train is packed with trademark David Leitch elements which make the film an entertaining ride. Hop on board the train if you’ve been craving for a pre-pandemic action-comedy.

Smooth chemistry between the actors, perfectly timed comebacks, and suitably bone-crunching action keep the 128-minute Bullet Train on track for half its ride. The other half is as forgettable as the mystery behind the assembly of assassins on a single journey.

Ladybug is an unlucky assassin who’s determined to do his job peacefully after one too many gigs has gone off the rails. Fate, however, may have other plans as his latest mission puts him on a collision course with lethal adversaries from around the globe — all with connected yet conflicting objectives — on the world’s fastest train.