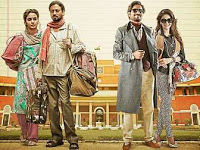 Despite its shortcomings, the film is never unwatchable and benefits enormously from a winning performance by Irrfan Khan who makes his every moment on screen count. From his hilarious wooing of a mother-daughter pair of potential customers at his shop in the film’s first half to his earnest amends on discovering his conscience late into the final act, he has you eating out of his palm. For Irrfan alone, Hindi Medium may be worth a watch. I’m going with two-and-a-half out of five.

OneWordReview…Hindi Medium: Wonderful. HindiMedium looks at the education system… A relevant and topical film… Makes you laugh, makes you emotional… Truly heartwarming!Dear Irrfan, is there any character you cannot portray? Such brilliance and versatility is rare. You sparkle yet again in #HindiMedium…

Except given the seriousness of the subject, he takes the more tried-and-tested Rajkumari Hirani formula of a story that’s part humour, part farce, but keeps you engaged, and nudges you to think. Most of it works. Some of it doesn’t. While being crowd-friendly, the film lapses into simplicities, such as that of seeing only virtue in the poor, while the rich usually comprise pretentious a-holes.And the picture very passionately makes a point that could well be a polished mirror to the audience before it. I’m glad I caught it.

As usual, it’s the marvelous Irrfan who keeps us watching. His is a fine, well-judged performance, which rises above the lines. At one point, we see him cracking up while watching his favourite florid TV serial : in that moment, ‘Hindi Medium’ is glorious, because the actor catches what he’s meant to do, meant to be, gloriously.. What happened to that tone in the rest of the film?

At the core, the film deals with a very relevant subject of how language divides our society. How angrezi-speaking people in India are touted to be ‘premium class,’ while the Hindi-waale¸ however illustrious or wealthy, are low-brow, or plain uncool. Hindi Medium shines in two areas that most of our films often fall short of. As far as the story goes – good writing, and as far as comedy goes – great timing.

Hindi Medium works because it somehow manages to stretch itself beyond its scrubby elements, easy half-baked jokes, lessons about consumerism and our love for English, into a simple story about a boy who would do anything to see his girl smile. There’s an oasis of sanity there.

A little preachy and over-dramatic towards the end, Hindi Medium strongly drives its point home. Chaudhary’s film has immense repeat value. You are likely to empathise with Qamar when she says, “Iss desh me angrezi zabaan nahi class hai,” (English is not a language but class in this country). And if you don’t then you might be a part of the group that wants the status quo.

On the whole, HINDI MEDIUM looks at the workings of the education system. It is a relevant and topical film that makes you laugh and get emotional at the same time. At the Box Office, the movie will be appreciated by the classes as well as the masses. Strongly recommended.

This is a film with which every Indian student and parent will be able to relate. Kudos to the makers for highlighting the way education is being turned into a business (which only the rich can afford) in our country. At the same time, it points out the plight of government schools where the major concern is not just lack of infrastructure and facilities but also the lack of students. I go with four stars for this one!

A couple want to give their daughter the best education so she will be accepted by the elite.