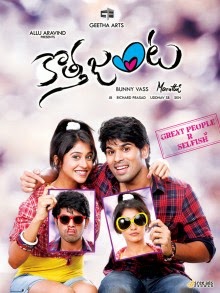 It’s not about love. It’s all about money for both the career-minded youngsters. When there are personal ambitions and aspirations, they will even step on a corpse to grab an opportunity. Both will also not allow an interference called love in their lives. Director Maruthi has a message to pass on to his viewers: help others. Don’t be driven by a selfish motive all the time. That makes it a meaningful movie.

Though the film is titled Kotha Janta, there is nothing new in their love story. The film starts off with some promise. The opening scenes are interesting and leave you hoping that the film will tell a different story. But once the heroine falls in love with the hero, the story treads the routine path. Since the film’s concept is to make a selfish guy understand the value of love, the director uses the clichéd path to bring home the message. Bottomline: Maruti tells an old story with Kotha Janta.

The first half of the film is a bit entertaining and second half turns boring. The plus points of the film are Regina Cassandra, Music and Cinematography. The negative points are lack of establishment of feel and in adequate screenplay. On the whole Kotha Janta could have been a better movie if director would have taken extra care on screenplay and exciting narration. So much could have been done with this plot, but well for a Tollywood commercial movie with a love story involved has to end on a happy note and so does this one. There is nothing new in the film other than KOTHA (New!) in the title.

The film is good fun to watch only when Sapthagiri and Posani are present. At other times, the film starts becoming slow and boring. The interval block is very routine and predictable. The concepts of jealousy and possessiveness could have been handled in a better way. Overall, Sirish has improved as an actor, when compared to ‘Gouravam’. A slow second half and lack of conviction in Maruthi’s narration spoil the fun a bit. Good performances from Regina and Sapthagiri make the film reasonably entertaining.