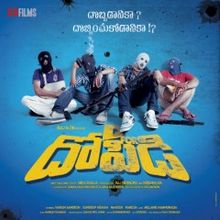 The movie has this irreverent sense of humour that makes up for the apparent lack of finesse in the filmmaking. The camera work and screenplay are patchy at best, but the music makes the cut. Guess the inexperience of the debutante director and the intention to pander to a wider audience messed up what could have been a much better final product. It’s an absurd comedy bereft of commercial elements. You’ll need to have a predisposition to wry humour to enjoy this one.

D for Dopidi is one film that defies the routineness of Telugu cinema, yet delivers an entertaining content. The runtime of the film is just 1 hour and 45 minutes and there are no songs (except for 2 songs during end-titles). The plus points of the film are screenplay, performances, realistic yet entertaining premise. Director Siraj Kalla is a director to watch out for. If you like the crime comedy angle in films like Money, Kshana Kshanam and Anaganaga Oka Roju, you are going to love D for Dopidi. You may watch it!

The film takes off promisingly and the stage looks set for some pace and energetic entertainment but inconsistency in the screenplay brought down the graph. The interval bang created some promise but as always the second half has lost out on elevating the story. Point is, budget is important but if certain aspects of quality are not checked then the entire project sinks. Anyhow, the film has just something to watch for but not enough to pull the crowds. Bottomline: D For Doubtful

‘D for Dopidi’ is a film which falls into no man’s land. It neither appeals to serious crime drama lovers nor to casual entertainment seekers. Poor execution has spoilt a promising subject and turned it into in a boring flick. Except for some decent performances and the presence of people like Nani, Tanikella Bharani and Deva Katta, this movie has nothing much to offer.

Though D For Dopidi takes off well initially with good number of funny moments, it loses pace with the proceedings and fails to grab your attention. Logic goes for a toss big time and the proceedings look silly and absurd. The film drags on and on in the second half. While the first half is a bit okay, it’s hard to sail through the second half. The script is simple on bank robbery and for such storylines, either gripping narration or entertaining quotient works. Sadly, D For Dopidi doesn’t offer enough of the two. The writers could have executed thrilling moments a way better and also, the fun factor is plainly missing despite good characterizations. The key robbery scenes are not handled well. In addition, the climax is so boring.

New director Siraj Kalla has simply wasted a decent concept with half back script and narration. First half of the film is better when compared to the second. Only positives in the film are lead performances, couple of comedy scenes and first half. On the flip side Screenplay, dragged second half and climax tear the film apart. If a proper care was taken adding a proper mix of thrills, fun and interesting second half movie would have been definitely made the difference. But as of now, movie is not upto the mark.