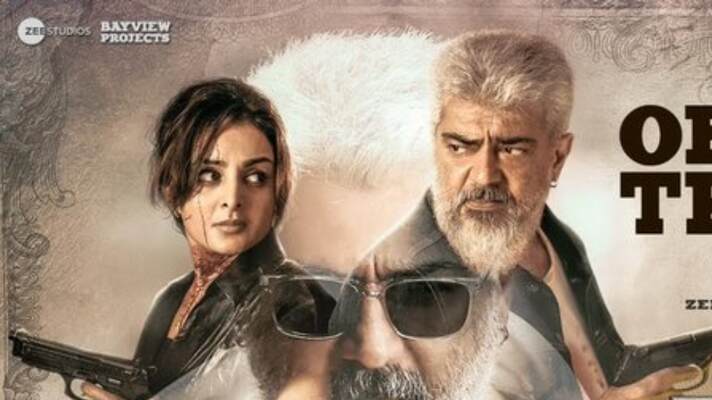 There are too many flashbacks and so the continuity of the story is not easy to follow. After a while, the scenes in the bank get repetitive and boring. How long can you look at Ajith sitting with a machine gun on his lap? The theatre was full on the first day of release, and will continue to be so, as long as the fans want to watch it. But the public will not waste its time or money on this mediocre fare.

Overall, “Tegimpu” is a total mess up with no storyline, no emotion and no hitting factor. It failed by all means and the film remains as a big thumbs-down in Ajith’s career.

Hardcore fans do not have to complain at all. Ajith is in solid form and looks stunning firing those bullets with swag and style on point. Manju Warrier does well too as his partner in crime. But the director isn’t really pleased with the idea of a mindless heist thriller, he wishes to deliver a yet another social message on corruption and the lacunae in the system. Result? A potpourri of vengeance and vigilantism that needed more style than sermons. Enough of Robin Hoods, time for some Robin Hoots.

Overall, Thunivu has enough in the first half to satisfy Ajith fans and families while the second half could have been handled better comparatively. As of now, the film ends up as a good watch for the festival.

What gives the film its highs are the scenes in which Ajith lets loose and does stuff that is more anti-heroic. The film falters mainly with the performances of the actors who play the antagonists with none of them appearing as a threat to Ajith’s character, not even remotely. Supreme Sundar’s action choreography, too, pushes implausibility quite a bit, especially with many of the gun shoots.

Overall, Thunivu is a film that brings back the Ajith we have enjoyed in the past. With an excellent premise, the film has a lot to offer. But, remember to look past the flaws.

On the whole, Thunivu is a watchable action thriller that has a very good first half but does not quite gather itself nicely in the second half. The film’s fast pacing and short runtime work as its positives, and that is enough to guarantee a fine watch in theatres.

Hurried rather than being racy, however it has a relatable backstory. Despite being extremely cinematic without any logic, the ‘Constantly something or the other happening on-screen’ factor engages to an extent throughout.

A criminal mastermind and his team form a plan and commit bank heists across Chennai, but the motive of their heists remains mysterious.