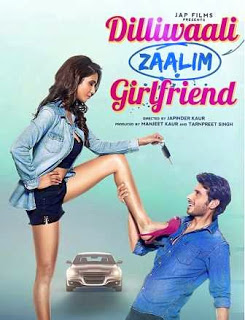 Dilliwaali Zaalim Girlfriend starts as a romcom, turns into a con caper, followed by a sting operation and finally ends as a love story. The plot of a woman luring a man to serve her own selfish interests, seems fun in the beginning, but it goes haywire to the extent that you’re least bothered about what happens to the characters or their plan to trap a dubious businessman Minocha (Jackie Shroff doing a terrible Punjabi accent), who rules the stolen cars business in Delhi

Here, he appears in yet another confused adaptation of the Khosla Ka Ghosla template. Instead of a plot of land, his loan-funded car is stolen. Mere Dad Ki Maruti? Of course not. Jackie Shroff plays the suspiciously accented Punjabi shark behind the racket here, and Dhruv and his pals’ harebrained attempts to bring about his downfall form major sequences of nothingness in this film.

The film is more or less predictable, but has certain elements of surprise. The plot is interesting, and is devoid of any over-the-top drama. The film’s music has a total hip-hop feel to it. The songs are unwanted and far too many. If you have no plans for the weekend, watch this timepass romantic comedy.