Like the case with each of Balki’s previous films (Cheeni Kum, Paa, Shamitabh), the script of Ki & Ka derails in its second half when it becomes clear that there’s little to the plot besides that interesting central conceit. There is no real conflict in the couple’s lifestyle choices so Balki manufactures multiple obstacles to keep the characters on their toes, and to keep you invested in them. I’m going with a generous two out of five for Ki & Ka. It feels longer than its two hours running time, and you won’t be able to shake off the feeling that it delivers very little in the end.

On the whole, Ki & Ka has a novel premise but the structure built over the new foundation is not half as entertaining as it should’ve been. It will work in some multiplexes of the big cities mainly but that won’t be enough to make the concerned people laugh all the way to the bank. Business in most of the single-screen cinemas and in mass-frequented cinemas and small and medium centres will be dull.

Kareena is terrific, Arjun, endearing. But Balki’s writing is inconsistent. A few scenes leave you misty-eyed, but for the most part, the stock situations are banal. Yet, Ki and Ka is worth a ticket because it tells shows how there is nothing wrong with the man wearing the apron and the women wearing her ambition.

The film is fun when it is setting up the roles. But the execution, as it goes along, gets rocky. Much of it stays episodic, and starts reinforcing the very stereotypes it set out to negate. Great to see the premise– send a woman out, keep a man in, and reverse gender expectations- on screen : it just needed to have been sharper and deeper.

This is a recurring problem in Balki’s filmmaking. Certainly, he comes up with the most unique ideas, infuses them with a whimsical energy but in his eagerness to impress, he loses all subtlety. Ki & Ka is obviously taken in by its liberal notions but fails to realise that it’s not so uncommon in today’s urban context where lots of working men and women share both their professional and personal duties.

All through the film, sundry characters, including Kia’s widowed social activist-mother (Swaroop Sampat), allude to pillars that hold up buildings while talking about the institution of marriage. Too much talk and very little plot progression put the skids under the film. Ki And Ka goes belly up pretty quickly never to recover fully. Verdict: With its promising premise undermined by erratic execution, Ki And Ka is only intermittently watchable.

Ki & Ka is an important film because it talks about some unconventional rather tough relationship goals, but it mostly remains a film which is immensely in love with melodrama. Too much breakfast and coffee table drama steals the steam from this well intentioned film. Ki & Ka isn’t a strong voice against gender stereotyping, but it’s one of its kind in mainstream Hindi film industry, and that makes it notice-worthy.

On the whole, KI & KA is a cleverly crafted feel-good film that packs all the emotions. Though it has strong performances by both Arjun and Kareena, the film is bound to draw extreme reactions from the orthodox audiences who may find the premise difficult to digest. It is an urban progressive film and should appeal more to women and young married couples.

Weak execution of such a fine concept or issue combined with a directionless storyline. The story loses its focus and just goes haywire.Ki And Ka is a brave attempt to bring in the issue of a gender role reversal but the story fails to keep you engaged. The film never reaches a conclusion of the concept and loses its focus. Despite the impressive performances by the leads, the movie simply disappoints.

But sadly, the interesting premise is reduced to a banal Bollywood romance whose messages on gender equality and stereotypes attached to men and women are lost in translation. The cameo from Amitabh and Jaya Bachchan is fun to watch, but they doesn’t have the collective power to elevate this average film into a spectacular one. Just like a marriage that has seen better days, this film was potent with promise but doesn’t cash in on its potential. Reserve this for a one-time watch.

Money is one of the reasons that causes gender inequality. Since women don’t go out to earn, their efforts to make a home, run a family and raise kids are often forgotten and taken for granted. We forget they do a job as well, round the clock, round the year, unpaid and sometimes unappreciated. Ki And Ka addresses the same thought in the climax where a mother minces no words and points out the sad power game as is. Alas, the film takes so long to make this point that I actually saw Arjun Kapoor’s beard grow in real time. Ki And Ka suffers from lazy, confused, amateur writing. There is out-of-character behavior and illogical scenes inserted in the name of feminism.

only his newly constructed world of love crumbles, rather unceremoniously, without every fighting those stereotypes. Instead, he muddles it up by creating more stereotypes. So, Balki’s ‘Ki and Ka’ may switch planets, or swap roles, but their actions are superficially daft and stereotypical. Balki, who had earlier worked magic with ‘Cheeni Kum’, creates a messy love story in ‘Ki and Ka’. Leave it untouched, and you will not regret it.

A young couple’s marriage challenges the gender roles placed upon men and women in Indian society. 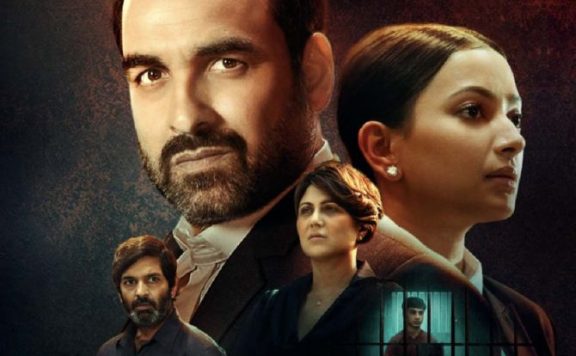