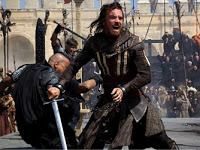 The number of video game movie adaptations that have failed to meet expectations is astounding. It’s as if Hollywood simply can’t make the transition from console to cinema. Hollywood’s current obsession with franchise-building might act as a consolation for fans of the game series who might take a leap of faith in a better constructed sequel. Meanwhile, ‘Assassin’s Creed’ becomes another exercise in squandering the considerable talents of its cast and crew.

With Assassin’s Creed I really thought the trend of awful video game movies would finally change considering the terrific star cast of Michael Fassbender and Marion Cotillard and the most excellent director Justin Kurzel. These three also made last year’s fascinating Macbeth adaptation, and I was sure this film would offer at least some classy entertainment. Unfortunately Assassin’s Creed is a film that is good looking for sure, but it takes itself too seriously and leaves you severely underwhelmed and kind of bored.

There have been numerous adaptations of video games for the big screen – most of them unspeakably bad. And for better or worse, Assassin’s Creed, based on one of the most popular and enduring franchises, has perfected that sensation. Not only does it achieve the unenviable distinction of making the audiences feel like they’re watching a particularly rowdy teenager play a particularly dreary video game, but submits its central character to the same terrible torture as well.It doesn’t matter if you are a gamer, a history (or movie) buff, a fan of Fassbender’s, or even an enthusiast of everything that is good in this world. Assassin’s Creed finds a way to disappoint just about everyone.

Through a revolutionary technology that unlocks his genetic memories, Callum Lynch experiences the adventures of his ancestor, Aguilar, in 15th Century Spain. Callum discovers he is descended from a mysterious secret society, the Assassins, and amasses incredible knowledge and skills to take on the oppressive and powerful Templar organization in the present day.