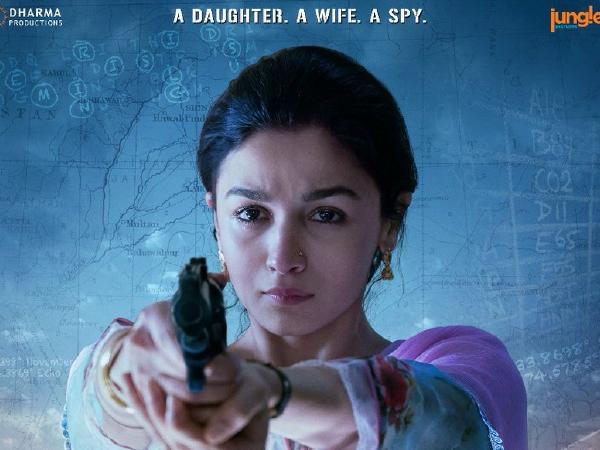 The film is admirable also because it’s a measured, mostly intelligent thriller that asks us to consider concepts of patriotism and honor without spoon-feeding us with manipulative background music or provocative dialogue. It’s well paced, and set to a thouhgtful score by Shankar-Ehsaan-Loy that never distracts from the drama. I’m going with three-and-a-half out of five for Raazi; a worthy follow-up to the director’s last film Talvar.

One of the major USPs of #Raazi is its taut screenwriting… Keeps you hooked from Scene A to Z… Vicky Kaushal excels… Rajit Kapoor, Shishir Sharma, Jaideep Ahlawat, Amruta Khanvilkar and Soni Razdan – every actor sparkles in this edge of the seat thriller… MUST WATCH!A meritorious story that deserves to be told… Brilliantly narrated by Meghna Gulzar… @aliaa08, you’re a powerhouse of talent… #Raazi unlocks your true potential as an actor… Take a bow, Team #Raazi.

The film is based on Harinder S. Sikka’s novel, Calling Sehmat, which itself is based on a true-life story. The spy drama is thrilling and supremely exciting. On the whole, Raazi is a box-office winner and will keep all concerned very happy. The story, script, direction and, of course, Alia Bhatt, will ensure that people flock to the cinemas.

Besides the intriguing bahu-spy premise, the film presents nothing new to inform the genre: spies have feelings, spies get sappy, spies cry. Even Bond films show us that these days. Gulzar does commendably depict how the other side is just like us – there is a rather clever use of the song Ae Watan, a patriotic track sung with equal fervour from both sides – but is the mere fact that this film does not thump its chest enough for applause?

However, at a time when hate and anger are the currency of the subcontinent, a film like Raazi needs to be made. For peeping into the Valley and finding a true-blue patriot, for looking across the border and finding decency, and for giving Kashmiri embroidery as worn by Alia an authentic, modern, featherlight touch. Like a delicious Indian irony, expect the clothes to linger around longer.

Raazi doesn’t try to be very cerebral and that works tremendously in its favour. The tactics of espionage are explained in the simplest manner. Also, the film chronicles a time where a lot depended on the agent’s mental prowess than the technological advancements. That way, actors also get a chance to explore their abilities.

‘Raazi’ defies the spy genre’s traditional expectations of full-blown action sequences. Instead, Meghna Gulzar’s steady hand gradually ramps up the tension throughout, leading to an explosive final act in this strong dramatic thriller. It also leaves you questioning the repercussions of war on the human psyche.

Meghna’s direction is brilliant in that it manages to fit the long story in little over two hours. Raazi is a well-made film which doesn’t shove forceful emotions down our throat but instead lets us soak them at our pace. Alia Bhatt yet again proves she is one of the best female leads we have in Bollywood at the moment. Kudos to Alia for picking up the right films to prove her versatility. She ups the projects by being associated with it and Raazi is definitely one of the best films of 2018 so far.

Raazi is a brave and honest attempt at highlighting the futility of war, that it knows no emotions or feelings or relationships, that it knows no right or wrong, that it is just blind and brutal. The film also makes us question our sense of patriotism especially in these times when, what we eat or what we wear, weirdly reflects the love for our country. It takes a mature, liberal and an emotionally advanced director like Meghna Gulzar to take a heroic story of an unsung hero like Sehmat (played by Alia Bhatt), that starts with a rather dramatic love for her ‘vatan’ and ends on a human note, screaming and begging for humanity.

The plot also moves at a rapid pace and has enough twists to keep you invested in Sehmat and her bid to save India. The scene in which Iqbal’s father (Sharma) defiantly exclaims how a chit of a girl could defeat Pakistan is telling. Had it not been a true story, we could have questioned the audacity of the events. Perhaps, that’s what makes Raazi, one of the finest films of 2018, triumphant and defiantly good.

Raazi (Agree), based on a true story, is an adaptation of Harinder Sikka’s novel “Calling Sehmat”, about a Kashmiri spy married to a Pakistani man during the Indo-Pakistani War of 1971. It depicts the journey of an ordinary Indian girl, under extraordinary circumstances. Sehmat (Aalia Bhatt), is sent to Pakistan in 1971, to source out any information she could, as war was becoming imminent between India and Pakistan.