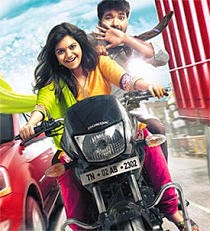 And, yet, despite the flair, the film feels uneven and the strain to maintain a lighthearted tone makes one think that nothing is really at stake here. And after all the mystery around the villain, we are provided with someone who is less convincing given the build-up. The plot could have made into a great black comedy, a satire on our materialistic lifestyle, but there is hardly any sting here.

Director Saravana Rajan deserves all credit for keeping the story short, humorous and entertaining. The ceaseless ringing of mobiles in the film gets on your nerves, until you realize that the director is trying to make a point. The omnipresent mobile can sometimes drive anyone crazy. There is an animated song in the film, Ullankaiyil Ennaivaiththu, which highlights out our dependence on mobiles and the havoc it can create. It is a crisply made film with an engaging screenplay, good music, great comedy and excellent performances. The climax is a little too tame, but even that seems to gel with the rest of the film. Vadacurry is a commendable effort by the director and definitely worth a watch.

Vadacurry deals with love and some interesting happenstances that occur due to the consequences of a few actions related to love. Confused? Well, it is not as confusing as what you read – the movie is simple and definitely interesting although it does not have a great story. Directed by Saravana Rajan and produced by Dayanidhi Alagiri under the banner Meeka Entertainment, Vadacurry has a lot of fun elements on offer. Verdict: A spicy entertainer pulled out of a normal story

Debutante director Saravanan Rajan has packaged a wafer thin story with equal share of comedy, romance, sentiment and suspense. While the first half is filled with relatable comedy and light hearted romance, second half is filled with thrill and suspense.If your idea of a movie is fun filled entertainment you can take this ‘Vadacurry’ as the main course for this weekend.