Ananth Narayan Mahadevan juxtaposes fantasy and reality and depicts the life on and off film sets. Being an integral part of the industry, Ananth makes sure he includes episodes that would make the spectator draw parallels with real life, neatly presenting the grime and sleaze behind the glam and insecurities behind smiling faces. Having said that, the film suffers due to a sketchy script intermittently. On the whole, THE XPOSE is a decently-crafted vintage musical-thriller that keeps you guessing about the identity of the murderer all through. An entertaining outing for fans of atypical Bollywood-style murder mysteries.

Thrills, chills, scandals surround the murder of a star in the ’60s. Eleven suspects are on the scanner. With cops, black marketers and booming beats, the story ‘falls’ from an almost ‘Teesri Manzil’ style plot. It’s pacy but the plot unravels stylishly, not intelligently (some suspects don’t have a clear motive for murder). Sonali is stunning and impressive, Zoya makes a pretty picture and Yo Yo is best when he’s grooving. Himesh slips well into his character, with quirkiness and confidence. This is far from a mind-bending thriller, but a decent effort which has some good ‘ol masala to keep you entertained.

On the whole, The Xposé is an engaging suspense thriller with hit music and excellent dialogues as the plus points. It will do fair business but it has an extraneous factor working against it and that is that it has a limited window of just one week to do business because it will face a major opposition in the form of the eagerly-awaited film, Heropanti, next week.

The Xpose wastes no time in getting to the point, which is to swiftly move towards finding the killer. Only, the path to solving the mystery of Zara’s murder is rife with inconsistencies of epic proportions. There is nothing new, story wise, to speak of and it is eventually reduced to a desperately stylised murder mystery with its single dimensionally dysfunctional and ditzy characters, jazzy music, dark glasses and trench coats, random slo-mo action sequences and what have you

Pardon the telegram style reporting, but ‘The Xpose’ begs to be written about in the way it should have panned out. The murder mystery set in the backdrop of big bad tinseltown should have been pacy and cheesy and racy, but ends up being a bit of a drag. Despite all the fun and games.If they had maintained the tone, ‘The Xpose’ would have been a hoot. But songs get stuffed in, a love angle slows things, and it gets stuck in cop stations and courts. They should have just kept the cheese thick.

Said to be inspired by real incidents in 1960s Hindi film industry, The Xpose celebrates the cinema of the decade with references to Teesri Manzil, Johnny Tera Naam and Satyam Shivam Sundaram. But The Xpose is not what it purports to be.The Xpose is HR’s way of saying he can do everything that Salman Khan, the man who gave him his big break, can do.

The Xpose: a throwback to 60s B-Town. Solely as a parody of nostalgia, this qualifies as a masterpiece.Intentional or not, this film gets away with it the same way Om Shanti Om does-not designed as biopics (Heroine) but as unwaveringly cringe worthy stories mirroring the era they represent, the kind where the title appears over a can of ‘Exposed’ film reels.

This film could be an out and out entertainer for you if you wish to see bad acting, and an unkempt storyline. Watch it if you need a good laugh! If you are going for the film hoping to catch up on some suspense thriller, The Xpose will surely disappoint you. It is a half baked attempt at creating a scandalous 60s era with underlined themes of s**, infidelity and murder. With tongue-in-cheek dialogues, I found the film unsuccessful at creating suspense. I am going with 2/5 for this movie.

director Anant Mahadevan has stuck to a tight script, just under 2 hours of run time, and managed to show some ugly, some beautiful truths of the film industry. In this 2-hour journey, the songs, ‘Dard Dilo Ke’ and ‘Ice Cream Khaungi’ will stay with you even after you walk out from the theaters. The background music goes well with the intense scenes adding more drama to the plot, which is full of twists towards the end. Himesh version 2.0 as an actor will change your opinion about him. 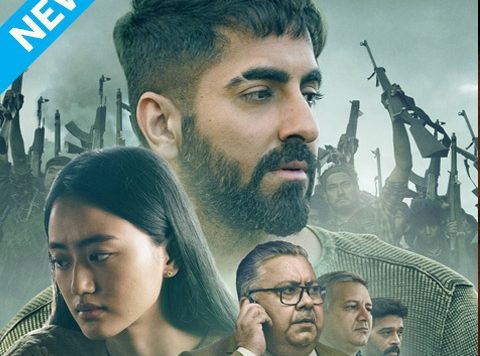