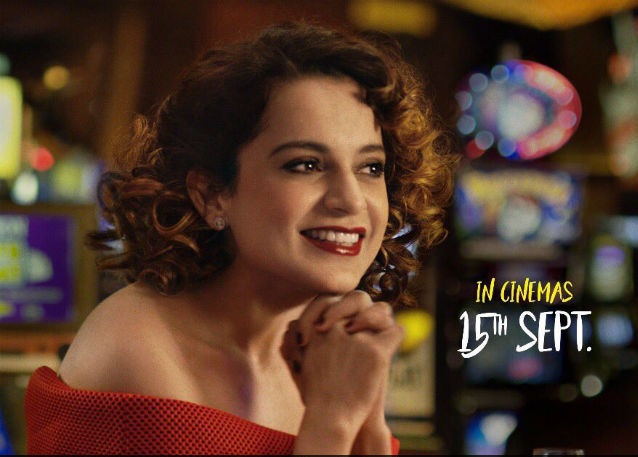 #OneWordReview… #Simran: Disappointing. Kangna is in terrific form in #Simran, but that’s about it… First half engrossing… Post-interval portions illogical, a complete downer.

Hansal Mehta’s cleverly titled new film Simran, starring Kangana Ranaut, has that rarest of things that’s practically gone missing from the movies lately – a compelling story at its core. Inspired by true events, the film is a fascinating account of an NRI woman who comes undone by her addiction to gambling. It’s an interesting premise, and the film delivers despite glaring contrivances. Mehta keeps the pace going, and delivers some terrific moments that’ll make you smile. I’m going with three out of five for Simran.

Simran is a brilliant performance trapped in a sloppy screenplay – ironical given the headline-hogging, fall-out between writer Apurva Asrani and Kangana Ranaut over writing credits. Actually, the writing is the weakest part of the film.The second half of Simran veers between silly and tedious. Director Hansal Mehta is attempting here to create a new type of Hindi film heroine but he isn’t able to build a sustained interest. Which is a real shame because a character like Praf is rare. There is such a refreshing rebelliousness about her.

On the whole, Simran is a poor show and will be rejected by the majority. A tiny section of the class audience in the high-end multiplexes of the big cities would find the film interesting because it is so different from the usual Hindi films, but that would not bring the numbers.

SIMRAN has a decent beginning. The first 10-15 minutes are spent in character introductions and also the Las Vegas sequence and it makes for a nice watch. But as soon as Simran turns into a habitual gambler, the film falls and never goes up again. There’s no logic to her actions and it gets bewildering after a point as to what’s going on in the film.On the whole, SIMRAN is a movie which can be easily skipped without any regrets. At the box office, it will turn out to be an average fare. Watch it only if you are a Kangana Ranaut fan.

But the plot gets into a loop, and her slide into another avatar — the gambler and thief– becomes tiresome. Kangana keeps us watching, though. With her plain varnished face, she comes across as a real, solid, complex woman, someone you can reach out and touch. When she’s on the top of her game, she’s glorious. Pity the storyline let’s her down.

Frankly, you can’t emotionally invest in Simran or root for her as much as you might want to. But when you watch the film, you will find yourself warming up to her occasionally, because she’s all you’ve got. Let’s give Kangana her due.

The first half of the movie casts a spell as you travel with Praful on her misadventures. In the second half, Mehta falls for the usual traps. But there’s more reason to celebrate Simran than diss it. The quirky perspective at finding laughs in troubled times is a refreshing way of viewing problems. And then there’s Kangana, making badass look simple, human and so full of heart. .

Ranaut and a few clever lines keep the film watchable, until the third act where the script sadistically starts piling misfortune on the character to ratchet up the dramatic tension. This is a bad move, leading to a prolonged climactic chase sequence featuring a leading lady who – we were told near the start of the film – is a poor driver. The last half hour has cringeworthy pacing and feels more mean-spirited than the rest of the film for no good reason. Perhaps we are only allowed one spectacular bank robbery film set in the city of Atlanta in one year..

Hansal Mehta, known for his critically acclaimed films like ‘Shahid’ and ‘Citylights’ handles the subject with care and doesn’t glorify the character. Although we know that the character she portrays is flawed and isn’t heroic, you can’t help but be her cheerleader.Overall, ‘Simran’ is an honest film made with a true heart and totally recommended to watch this weekend. The last scene will leave a smile on your face as you leave the theatres..

But the movie suffers from over-crowding of genres. There’s humour, there’s tragedy, there’s violence and there’s drama, but it may not always come together as a whole.Just like its grey heroine, the film is studded with hits and misses. Reserve this for a one-time watch as it’s incredible to see Ranaut play a self-destructive rebel. But if you are looking for a cohesive cinematic piece, then you are looking at the wrong film.

A Gujarati housekeeping lady in the US allows ambition to get the better of her & gets involved in a world of crime. Simran is a racy, fun film with Kangana Ranaut playing the titular role.