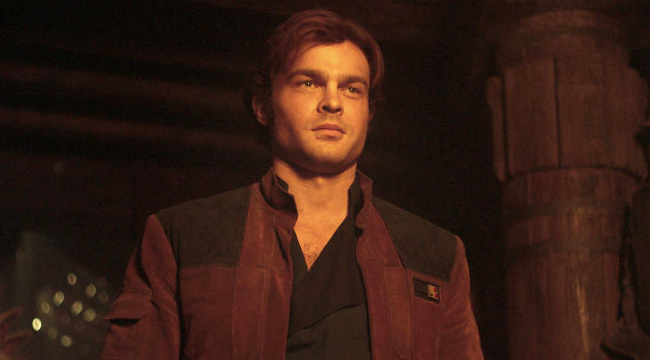 I can think of many words to describe the new standalone Han Solo movie, but let’s just go with ‘colossally disappointing’ for now.Solo: A Star Wars Story is a busy yet unmistakably underwhelming entry in the beloved sci-fi franchise.Solo: A Star Wars Story never skimps on spectacle, yet fails to genuinely surprise you with anything bold or original. At 2 hours and 15 minutes it’s a trudge at best, not the exhilarating flight worthy of the best pilot in the galaxy. I’m going with two out of five.

Solo: A Star Wars Story is heartbreaking not because it’s bad but because it’s ordinary. There is such a sense of programmed industrial product about it. It’s a placeholder that fulfils its duty but there are no surprises here or signature flourishes or moments of shock and awe. In places, the narrative seems to soar but then it settles back quickly into predictable beats. And the unkindest cut is that this is the origin story of one of the best-loved characters from the Star Wars universe – Han Solo.

Admittedly, the last act makes up for its plodding initial 2/3rds with some potentially exciting developments. In the end, director Ron Howard manages to salvage the remnants of the production mess to a fair extent. While he plays it safe and loses some of the mythical Star Wars allure along the way, he succeeds in creating a decent sci-fi action film. ‘Solo: A Star Wars Story’ has enough action, CGI spectacle, and callbacks to satisfy both its old and new fans while barely justifying its addition to the franchise.

It is unclear how the divided reactions to The Last Jedi would affect Solo, but it needed to be a very good film to get people excited about Episode IX. This is unfortunately quite a tedious film that does not give you a reason for its existence other than milking the Star Wars cash cow. It is all up to JJ Abrams again to fix everything that was broken in the last three installments.

Solo: A Star Wars Story has no such worries. It works. If not mind-blowingly dazzling, the film certainly proffers a slew of enticements that will leave nobody, least of all admirers of the world’s most lovable space outlaw, short-changed. It has the strength to draw Force-loving fans to the multiplexes.

But as long as Solo is a series of neatly sewn high-octane action spectacle — the speeder chase in the opening sequence, a zippy train heist amid icy mountains to steal some high value coaxium or Falcon bolting out of a fiery space tornado and giant tentacle monster — it’s an unobjectionable, one-time watch.

Young Han Solo finds adventure when he joins a gang of galactic smugglers, including a 196-year-old Wookie named Chewbacca. Indebted to the gangster Dryden Vos, the crew devises a daring plan to travel to the mining planet Kessel to steal a batch of valuable coaxium. In need of a fast ship, Solo meets Lando Calrissian, the suave owner of the perfect vessel for the dangerous mission — the Millennium Falcon.