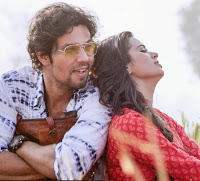 Laal Rang, director Syed Ahmad Afzal’s sophomore venture, is one more feather in his cap. Given how surprisingly good the film is, Hooda’s spellbinding star turn isn’t a wasted effort. Laal Rang spins an unhurried but engaging tale of love, friendship, heartbreak and redemption against the seamy backdrop of Haryana’s blood theft racket. An understated thriller that keeps the conventions of the genre at bay, it has no gunfights, no big chases, and no stylized, in-your-face jabs at generating edge-of-the-seat excitement.

The revelations about the dark underbelly of metropolitan cities never make it to the big screen. There is a fleeting scene in which rickshaw-pullers sell their blood for money, but once the movie ends, it is long forgotten. Laal Rang is half-baked and unconvincing. Despite the grit, it never becomes a riveting film. Here’s a lesson to learn: Ideas don’t make good films, execution does

Laal Rang does not pack a solid punch because of its choppy storyline. Also, since the film is set in the heartland of Haryana, all the characters speak in Haryanvi, which after a point becomes too much. If you don’t listen carefully, you may miss the point. Frankly, it’s okay if you do because Laal Rang isn’t worth your money or time unless you’re a die-hard Randeep Hooda fan.

one must give credit to Afzal for being sensitively able to explore the growing friendship between Shankar and Rajesh and also the awkward yet sweet romance between Rajesh and his Rapidex English speaking girlfriend Poonam (Pia Bajpai). Also, he has picked the right star cast, which largely contributes to the film. While Akshay Oberoi is earnest and shows huge potential, it is Randeep Hooda who gives a killer performance in this one. One didn’t have doubts about Hooda’s talent earlier, but it is roles like this that fully show what he’s capable of. Not many actors can come across as so hot and cool at the same time.

The film is meant to be based on two `real life’ incidents, but it doesn’t tell us which. What we get, to begin with, is a scary inside view of the kind of skullduggery that goes on between places and people who are meant to be engaged in saving our lives, and are instead, busy lining their pockets, criminally indifferent to the dangers they pose. Then it boils down to the usual cat-and-mouse game between a diligent cop ( Duggal) and the blood robbers. And Hooda—an actor who is always watchable, especially when he is strutting the walk– loses yet another opportunity to break out of the long run of indifferent films he’s been stuck in.

A film on the black marketing of blood would seem dark enough to be film festival-worthy. An insider’s view of the nefarious industry that retails the red stuff flowing in our veins, Laal Rang keeps it typical. While the genre doesn’t warrant a fixed constitution, the film spends too much time in explaining the modus operandi and the cinematic flourishes seem predictable and laboured.

Laal Rang is not a movie that boasts of high star values and hence not many would flock to theaters to watch it. Although if you are a fan of Randeep Hooda, this one should be your pick. As an insight into the Blood mafia, this is not exactly a docu-drama so you may not get the detailing here. The director tries to present a serious issue with a commercial twist but fails to get the right balance. Romantic twists and songs form as setbacks to a compelling storyline.

Rajesh (Akshay Oberoi) is a youngster who is in love with a fellow student Poonam. Poonam on the other hand is money minded and wants a guy who has a good source of income. Rajesh meets Shankar(Randeep Hooda) who runs a illegal blood bank. Shankar also has had a heart break through a punjabi girl (Meenakshi Dixit) whom he still misses. Though initially Rajesh is not aware of Shankars illegal trades, he likes it the instant he comes to know about it and gets involved to earn quick money to impress Poonam. Slowly as the business kicks off, Rajesh starts showing off his money to Poonam. Poonam who is greedy incites Rajesh to get more and this brings friction between Rajesh and Shankar. The cops who have got the hint of this business are also closing in on the illegal activity lead by a dabang inspector (Rajniesh Duggall). As things start to fall apart the Rajesh starts to play the victim card in front of Poonam. How the illegal activities come to an end and what becomes the fate of Shankar and do Rajesh and Poonam really love each other forms the end of the story.