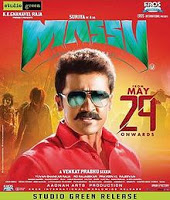 Watch out for the end-credits bloopers like always, and leave the hall with a smile as Masss ought to be a satisfying experience. It has the expected Venkat Prabhu elements, the crowd-pleasing supernatural factors treated in a slightly different way and of course Suriya in all his glory.Verdict: A well-timed Sixer from Venkat Prabhu and Suriya.

Masss is a typical Venkat Prabhu platter, while still thriving to be different from his earlier films. For the first time, the director introduces a fantasy/horror element into the mix, and tops it up with his usual one-liners, comics and twists. When a director is able to blend in action, romance, comedy, horror, thrills and fantasy into a single film, he deserves to be appreciated. Masss is a sincere effort from Venkat Prabhu, whose intent until now has been to provide films with a solid screenplay. The three deciding S’s in ‘Masss’ could stand for Suriya, story and the screenplay. Venkat Prabhu gets them right to an extent, making us add another S – satisfying.

Current Tamil movies have been gradually extending into the horror world. These recent hit movies have hedged their bets by mixing comedy into horror genre. Masss is no exception to that rule. But, what is uniquely different about Masss is Venkat Prabhu’s point of view in narration with sincerity in weaving an intelligent screenplay. Suriya duly feasts on this opportunity by delivering wide range of emotions called for by Venkat Prabhu’s script.Verdict : Masssively entertaining

Everytime Venkat Prabhu’s movie hits the theatres the expectation is to see variety with a bash of youthful energy, and the ace director this time has adopted the most successful genre in the recent times- horror comedy. Suriya and premji set the pace of movie with light hearted comedy amidst spooky super natural elements in a rather interesting way.

Synopsis: A Conman gets Conned by a Ghost. But a very nice twist at the end of tale when the Conman comes to know who the ghost is and what is his relationship with him.