Gabbar is Back  Movie Review 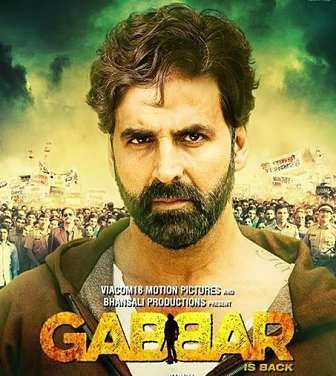 Reviews Counted: 13
Positive: 6
Negative: 7
From All the  Top Critics reviews on the web

From the clumsy plotting and a manipulative back-story featuring a visibly disinterested Kareena Kapoor, to the been-there-seen-that action scenes and the uninspired score, there’s little to recommend in this movie. At best, Akshay Kumar lays on the charm in a few well-timed sequences. But it’s too small a reward in exchange for sitting through this boring film. I’m going with one-and-a-half out of five for Gabbar is Back. Not surprisingly, your migraine’s back too!

Akshay Kumar strikes back with yet another power-packed, towering performance in an absorbing fare GabbarIsBack. Clapworthy dialogue. My fav scene/s in GabbarIsBack? The entire hospital episode [terrific] and the dumdaar, powerful climax.

Krish’s direction is very good. His narrative style is very crisp and it keeps the viewers involved all through, never giving them a dull or boring moment. On the whole, Gabbar Is Back is entertaining all the way. It will bring back the audiences to the cinemas and keep everyone smiling despite its high cost

Dumbed down to a ridiculous degree, the film — directed by hotshot Telugu director Krish — tries to be a less-pathetic version of Salman Khan’s Jai Ho and might have succeeded on that count were it not for an absolutely daft script. Shruti Haasan is hideous in the film, an imbecilic character played by a girl with clearly no charisma and dubbed when nobody cared enough to look

While the music’s pleasantly seamless, the editing is razor-sharp, evoking Manmohan Desai, rushing you from one entertaining scene to the next, without time to figure things out – but just enough to feel.Now, Gabbar Is Back – and you’ll feel his return rocks. Just don’t angry him.

This Gabbar is a damp squib. Not only does he lack the pull and power of Hindi cinema’s most memorable baddie, even the half-baked homilies that this holier-than-thou terminator of the corrupt mouths reeks of staleness. Clearly, nobody put the makers of this film through the paces. They might have then known how to make the best of their limited cinematic resources and craft something less mucky. Watch Gabbar Is Back only if you are a diehard Akshay Kumar fan.

Gabbar Is Back is a full on ‘masala’ film with a lot of applause worthy scenes. In one innovative sequence, Akshay Kumar exposes the medical mafia. This sequence is so potent yet funny that you would want to repeat it in actual life. Similarly, the writer has tried to give a subtle message of road safety through a small accident scene. Such scenes in a mainstream film have the potential to penetrate the common movie-going audience’s mind.

The trouble with this remake of a Tamil actioner is the trouble most such products are beset with: same strange lost-in-transmission flavor which doesn’t transfer, mustachioed bad guys who look as if they’ve showed up from a different set, a leading lady who pops up for comic relief, and dialogues delivered at a decibel that threaten to damage your ear drums.

The film is a complete entertainer filled with punchlines, action and an absolutely hot Akshay Kumar. Gabbar Is Back is a typical massy commercial film which thrives on its lead star Akshay Kumar. The story is highly predictable but if you are a fan of films that have dialogues like ‘Sher Ka Shikaar Karna Ho Toh Bakri Ko Aankhon Ke Saamne Rakhna Padta Hai’ then this one is your sure shot weekend watch.

On the whole, GABBAR IS BACK is an average entertainer which will draw huge footfalls over the weekend due to catchy massy title, action drama and the fact that it is releasing on a holiday. Post the weekend, the film will have to rely on ‘PWD’ (Performance on Week Days) to see it sail through. If you are sick and tired of corruption in India, then, you shall find GABBAR IS BACK inspiring, else you may find it boring and preachy.It has the South Indian stamp of filmmaking written all over it. Ear-splitting-background-score, over-the-top action and humor emanating from strange food references like samosa-and-laal-chatni.

Krish’s attempt to remake Tamil film Ramana may not be liked by the Hindi speaking audience. His treatment of the film, though fast paced, lacks connect which he could have easily had with a massy star like Akshay Kumar. Akshay Kumar has put sincere efforts in every department be it intense or romantic scenes. But all the elements of screenplay, editing, and storyline put together doesn’t really help to drive the point back home. The climax of the film is a yawn and doesn’t move you at all.

Director Krish’s Bollywood debut disappoints greatly because of his inability to adapt the script of the 2003-hit Tamil action-drama ‘Ramanaa’ to our times. Had ‘Ghajini’ director AR Murugadoss and writer of the original tweaked it a bit, it could’ve benefited. Apart from borrowing legendary lines from the classic, this Gabbar clearly didn’t get any powerful lines of his own. Sorry, Akshay! You’ve given Gabbar a bad name.

Movie Name: Gabbar is Back :

The film is a remake of the 2002 Tamil film Ramanaa. The film is about a common man who decides to abolish corruption altogether in the society at various levels.

Gabbar is Back Theatrical Trailer