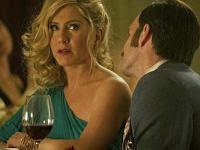 Two hustlers set out on a get-rich-quick scheme involving the kidnapping of a rich man’s socialite wife followed by a fat ransom demand that they hope will net them a big cash bonanza. However, things can go wrong and indeed, they do in this comedic caper of double-crosses and deceit The film is adapted from Elmore Leonard’s The Switch. His other movie adaptations include the Tarantino-directed Jackie Brown and Get Shorty. The film stops short of being something truly memorable but has just the right amount of witty turns, deft plot twists, funny situations and interesting characters.

Life of Crime is about four people who have all seen better days, living in a city that has seen better days. This sense of what could have been permeates this crime caper/character study. The film itself could do with some bit of tightening, but while they are on screen, it’s a pleasure to watch each one of them. Particularly Aniston, who once again shows that she clearly understands what she represents and how to make the most of it.

And for a caper, where’s the tension? Everything, however unusual, is so taken for granted… like going to sleep and knowing you’re going to get up. You could step out for several minutes and would still have missed nothing. If you’re gonna watch this one, do it for Aniston. She is near about the only spark you’ll get from this lazy attempt of a movie.

In the end, Life of Crime is just several well-executed scenes put together, but to no effect. At times, you feel bad for the great acting talent squandered, and you wish to see something more than what is on display. It does pack a special surprise in the end, which alone makes it a one-time watch. Adapted from Elmore Leonard’s novel, The Switch, the film may impress the fans of the author but will leave the others (i.e. everyone!) disappointed.