Home » Featured » Sin City 2: A Dame To Kill For Review 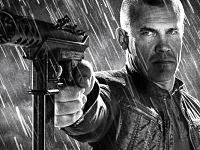 Sin City 2: A Dame To Kill For Movie Review

Almost a decade has passed since the first Sin City but without missing a beat, ADTKF presents the same palette of light and shade, this time with a deeper darkness. Miller and Rodriguez do not seek narrative complexity, despite the large cast list, so don’t look for linearity and strict structure in this movie. With its simple dialogues and also because it is in essence a gorgeous-looking tableaux, enjoy this slick slice of cinema more for its visuals rather than anything else.

Unless you are a student of animation or art direction, or if you’re doing your PhD thesis on representation of minorities in cinema, or if you’re a hormone-crazed teenage boy, Sin City: A Dame to Kill For is a great film for you. Devoid of a script and background music worth paying attention to, and with no ability to emotionally engage the viewer, the visual charm of the film fades sooner than a mayfly’s youth. While it isn’t really a great watch, Sin City: A Dame to Kill For could be a good way to kill some time.

The film makes concessions for those who may not have seen the first part by giving enough hints, and is loyal again to the last line to Frank Miller’s graphic novel series. But the Joseph Gordon-Levitt part doesn’t have the chills of the cannibal Elijah Wood, Alba’s pouts have clearly outlived their usefulness, the 3D is entirely pointless. It would be strange to deploy that word for Sin City, but really that’s what this film could have done with – some amount of normalcy.

Sin City is so happy being cocooned in a time and place where the enemy remains the same, the punchlines remain the same, even the gluttons for punishment come back for more. There’s no excitement left despite this being a Frank Miller/ Robert Rodriguez film. As a fan, this one is dead on arrival on account of having come so late. But if you’re new to Sin City, well now’s as good a time as any to get acquainted.

This movie is a screaming ride into the night. You will feel the howling of the wind, the corruption of power, the seduction of beauty, the poison that enters men’s souls and the desperation of Sin City. A dance of death, destruction and dames, an entertainer till the end.