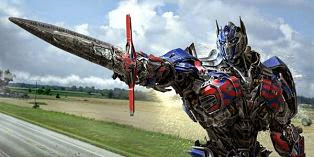 To be fair, ‘Age of Extinction’ delivers pretty much everything one would expect from a ‘Transformers’ movie – both the good and the bad, and then some. Like the previous films, this fourth installment is beset with script holes, clunky dialogue, hammy acting, and the overconfidence of a director who doesn’t know when to stop. But for fans of the same noisy but vacuous spectacle that these films have come to represent, ‘Transformers: Age of Extinction’ is actually a step up from the last film. I’m going with two-and-a-half out of five. Now if only you’d carried that cushion.

But while the effects are totally off the hook, the dialogues sound like a random collection of one-liners. Indeed, the machines display a wider range of emotions. But then again, you don’t watch a Michael Bay film for intense dialogues. The idea is, why shoot a person just once when you can take a cannon instead and literally shred not only the person, but the car next to him, the building behind him and a few bystanders, with a few hundred bullets and shells for good measure. Be it fiery photogenic explosions, smashing buildings, mega monster battles and more, there is no doubt that action rules this film.

To be fair, the first Transformers movie was rather enjoyable. But its sequels — Revenge of the Fallen and Dark of the Moon — are so brazen about their intentions — box-office; it’s hard to assess a business model like a product of cinema. Given the unexplained draw the Transformers brand has, I won’t be surprised if this one works too. But nearly three hours divided in yawns and headache prompts me to repeat what Optimus Prime says in the end, “Leave Planet Earth alone.” You hear that, Bay?

So it’s no surprise that the plot is besides the point. Like the previous ones, this latest is all about the noise that Bay can generate, and he is Hollywood’s biggest detonator, no contest. The endless car chases, explosions, crumbling buildings, are all tricked out at ear-shattering decibels. Also, I was pleasantly surprised by the quality of the 3D : the glasses were light and the screen stayed lit up, rather than dark.

Transformers: Age of Extinction is a film that wins due to its fantabulous visual and sound effects. While it is a tad-bit too long, no one’s really complaining, ’cause there is a lot you can look forward to. From apocalypse, to dinosaurs (now dinobots), to man-made autobots, to family drama, there’s something in it for everyone. This is the perfect weekend outing for everyone. Explosions and destruction galore, the film is a visual treat in signature Michael Bay style. Go alone or with company, the effect of the film shall linger on until much later. Promise.

I am a fan girl when it comes to the Transformers series and no matter how bad the film turns out to be, it is a mandatory watch. I am sure many of my readers can resonate with this feeling of sparkling ebullience. Transformers: Age Of Extinction is pretty much a must watch. Wooting for the rip roaring autobots is guiltless fun and the child inside me couldn’t help but be overwhelmed. Despite the ironies, the gags and the needless humor working as constant distraction and the story making no significantly memorable headway, the editors along with Bay have created a technical paragon with this! Peeps, the level just got a notch higher and you would regret missing this!