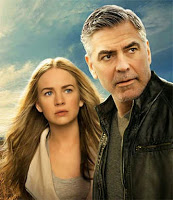 For a film whose name would look better on the poster of a music festival, Tomorrowland doesn’t manage to come up with music that blows one away. In fact, nothing about the film really does any wonders. The visuals are pleasant. The acting is good. The story is good enough. But not one factor in the film pushes itself beyond this line, towards greatness.For a film with such immense potential, Tomorrowland plays it too safe.

Tomorrowland is an ambitious, sprawling tale involving different generations, time travel and visions of the future. If there’s one simple fact that the film clearly establishes during its expansive run-time, it is that humanity’s collective actions will have a direct impact on the days and years to come. And so, the world of tomorrow as depicted here can either be a post-apocalyptic disaster (climate change or nuclear war, take your pick) or a gleaming embodiment of mankind’s finest achievements.

Unlike other films that speak about dystopian societies, “Tomorrowland” has a very positive and optimistic approach. Visually, the film is bright and cheerful thanks to cinematographer Claudio Miranda’s brilliant camera work, production designer Scott Chambliss’s fine production output and music composer Michael Giacchino’s elevating background score. The only issue is that though the film ends on a very upbeat note, it does not offer any solutions to the issues it raised.

It takes an hour for the premise of Tomorrowland to set up and you keep waiting for “wow” moments as Bird crafts his meandering introduction to the utopia. But it’s all in vain. The characters are flatter than the stereotypical pancake and even the actors seem to be bored by the roles they play. There’s a little bit of Interstellar, a touch of Terminator, a nod to Stargate and other little elements scavenged from past films in the patchwork quilt that is Tomorrowland. Unfortunately, this also means that Tomorrowland is a collection of “huh” moments.

Synopsis:A former boy-genius (George Clooney) and a gifted teenager (Britt Robertson) set out on a dangerous mission to unearth the secrets of “Tomorrowland,” an enigmatic location caught between time and space.