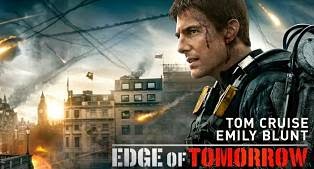 Despite borrowing bits and bobs from many films including Moon director Duncan Jones’ grossly underrated Source Code, Liman still succeeds in delivering a film that skillfully melds a high-concept premise with thrilling action and even spurts of unexpected black humor. I’m going with three-and-a-half out of five for Edge of Tomorrow. For a film about repetition, it never feels tired.

Edge of Tomorrow, directed by Doug Liman, is a little different. In this one, we also get to see Cruise die again and again and again. Based on the novel All You Need is Kill, Edge of Tomorrow has a compelling plot that becomes less and less interesting as it plays out. In a summer brimming with annihilating monsters, vicious aliens and assorted villains, Edge of Tomorrow just isn’t dazzling enough to stand out. I’m going with two and a half stars.

The Mimics are set to take over the world in this post-apocalyptic outing. Humanity’s hope rests on a soldier who is caught in a time loop. Can he use his powers to defeat the alien hordes? Cage’s emergence as a soldier who actually has a fighting chance against the enemy is fascinating. Writer Hiroshi Sakurazaka’s story has solid sci-fi credentials and Cruise proves that he still has the chops to pull off mega action movies. Edge of Tomorrow is one of his most compelling and nuanced performances in this genre.

Edge of Tomorrow has enough aces up its sleeve to bungle its prime objective — entertain the hell out of you, it may not be a faithful adaptation but it’s a damn energetic one. What lends Edge of Tomorrow its vigorous kineticism is how it rolls out the same scenario repeatedly, of a war between military officers and Mimics, the alien xenoformers. How they emerge from this unstoppable hoop of die-try-die wherein Cage makes countless new memories of the same day and Vrataski reacquaints herself is, oh yes, worth the price of admission.

The film is based on the manga ‘All you need is Kill’ and thankfully the film is less Hollywood and more Jap manga both in style and plotting. There are neither love story clichés nor saccharine orchestra music to sentimentalize issues. This is a hardcore action film that reminds you why we started going to theaters to watch action movies. You walk into this film expecting some mayhem, you’ll get a gigantic serving of it along with smart plotting and even clever humor.Moreover this is an original sci fi movie, not a sequel or a remake, and a damned good one at that.

Tom Cruise continues to entertain us with Sci Fi films and his latest one, Edge of Tomorrow is one of the most entertaining films he has done in the recent past. Director Doug Liman and screenwriters Christopher McQuarrie, Jez Butterworth and John-Henry Butterworth put together a great film. If you have enjoyed Tom Cruise in the Mission Impossible Series and even Magnolia, you will love this one too.

Edge of Tomorrow is an enjoyable action film, which doesn’t pretend to be any more than that. It takes great characters and combines them with breathtaking visuals to put together a film that is entertainment at its best. If you love sci-fi based action films, you can’t afford to miss Edge of Tomorrow.