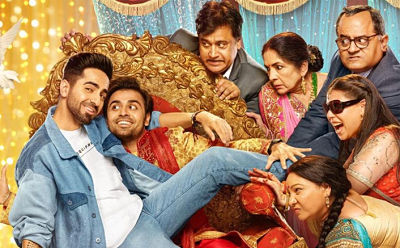 What’s especially refreshing is that the lovers or their relationship is never the source of comedy, it’s the extreme reactions by those around them to their relationship that is treated with humor. In that, Shubh Mangal Zyada Saavdhan is not so much about homosexuality as it is about homophobia.Shubh Mangal Zyada Saavdhan isn’t consistent. The script spends too much time focused on the infighting within Aman’s family instead of staying with the leads. Despite that there is enough to enjoy and appreciate here. It takes a difficult subject and executes it with some flair. For that, I’m going with three out of five.

On the whole, Shubh Mangal Zyada Saavdhan has entertaining comedy but lacks in conviction. It will do ordinary business at the box-office. Of course, recovery from non-theatrical sources is big and, therefore, profitability should not be an issue but its theatrical business will be very limited and below expectations when compared to the earlier films of the hero.

To begin with, let’s applaud the fact that Shubh Mangal Zyada Saavdhan exists. For too long, Bollywood has trapped homosexuality in cruel stereotypes. A mainstream movie with an A-list hero playing a gay man without apology or explanation is a cause for celebration.In an interview, Ayushmann described Shubh Mangal Zyada Saavdhan as an introduction to homosexuality for an average Indian homophobe. The film might work as that. But for those of us who aren’t in this target group, it doesn’t connect enough. Though it’s heartening that with this film and Ek Ladki Ko Dekha Toh Aisa Laga last year, Bollywood has at least begun the conversation.

All in all, ‘SMZS’ will give small-town parents the much needed nudge, and maybe, in the distant future, they will have the strength to accept their offsprings for who they are. But, for now, watch it for the performances and the ‘chaska’ of love, with two men pouring their hearts out for the world to see and accept.

A gay rom-com that exhorts its characters – and its audience – to be extra wary (zyada saavdhan) is only acknowledging its own – and Indian society’s – ingrained inhibitions about same-sex love. But debutant director Hitesh Kewalya (who scripted Shubh Mangal Saavdhan before being put in independent creative charge of the follow-up) does a reasonable job of aiming sturdy, humour-laced jabs at homophobia while taking care to soften the blows so as not to rattle the public beyond a point.

All said and done, some films take themselves too seriously because of their subject but this one had every scope to do everything differently. It gets stuck in the formula serving nothing close to extraordinary.

Shubh Mangal Zyada Saavdhan is not so much a homosexual romance as it is an exuberant appeal imploring conservative Indian parents to accept and respect their children’s choices, gay or straight, notes Sukanya Verma.Cleverly countering prejudice, Kewalya’s queer treatment of a family going bananas on learning their boy wants to be with another boy highlights the real freak show is the so-called normalcy a heteronormative existence shrouds itself in

On the whole, SHUBH MANGAL ZYADA SAAVDHAN is a decent attempt and makes an interesting comment on homophobia which exists in our country. At the box office, it has the chance to work with the urban audiences, especially the youth. However, it will be a challenge to bring in family audiences and the audiences from small towns and cities. The presence of Ayushmann Khurrana may give a boost to its collections.

Shubh Mangal Zyada Saavdhan is a comedy drama film following the romance between two men, played by Ayushman Khurana and Jitendra Kumar. This movie delivers a crucial message on homosexuality with a healthy dose of laughter.