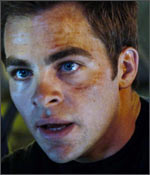 Rebooting the Star Trek saga in a way that it must appeal to both its loyal fan base of Trek faithfuls and a whole new generation of young, unfamiliar film-goers couldn’t have been an easy job.Despite the occasionally indecipherable mumbo-jumbo about time-hopping between the past and the future, Star Trek is an easy watch, enjoyable even for franchise virgins. I’m going with three out of five and a thumbs-up for JJ Abrams’ Star Trek. It may not go boldly where no one has gone before, sticking to a safe and simple initiation, but it’s unlikely you’ll be bored even for a minute!

In toying with the conventions and seeking to rebuild a franchise with a brave new origin story, the people responsible for making this movie have boldly gone where other men have ventured before, but only few have returned unscathed. Nothing gets fan blood boiling as quickly as an ‘update’ to a beloved franchise that does not honour existing canon. To their credit, they do enough things right to inspire a new generation to join the tribe of the Trekkies. And they do it with style.The film looks great. Glossy and colourful with a palette that shies away from the muted tones that characterise more serious science fiction films, this is a motion picture clearly designed to draw the masses in.

The bottom line is, the cast and crew of the film have succeeded in doing exactly what they set out to do, re-device an original and legendary show and make it better than all the other that came in between.Star Trek is a quick, action-packed movie that wastes no time with too much chitchat, no more than the show did anyway. But someone only recently told me, it’s suddenly cool to be a Trekkie and I do believe, he just may be right.Star Trek is a MUST watch of you’re a fan and if you’ve seen just a few of the old episodes, you’re going to want to go back and watch the reruns.