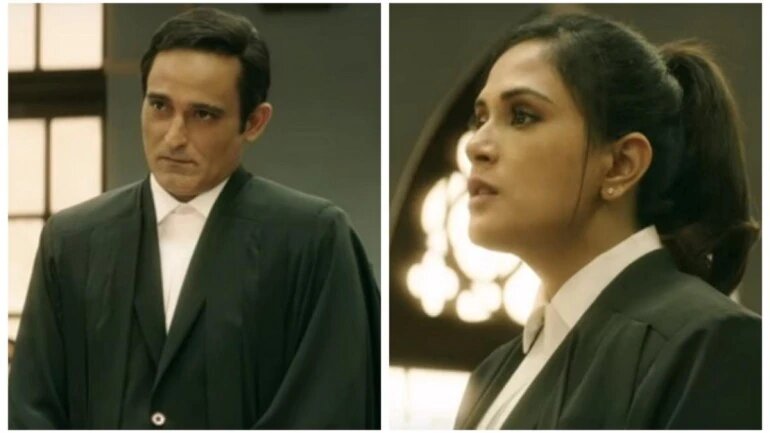 Section 375, starring Akshaye Khanna and Richa Chadha, is either a deeply cynical, borderline misogynistic film that takes the MeToo movement back a few steps, or it is an uncomfortable but honest study of male privilege, the abuse of power, and the politics of consent. However you may choose to look at it, the film is an unmistakably compelling courtroom drama. Frankly I left the cinema not entirely sure how I felt about what the film was saying. It’s a well-made film with a persuasive argument that is nevertheless disturbing. I think you should decide for yourself. I’m going with three-and-a-half out of five for Section 375.

Manish Gupta has penned a fine story with good twists and turns. His screenplay, with additional screenplay by Ajay Bahl, is also engaging, more so after the interval. The final twist in the screenplay is so fantastic that it could change a lot of people’s opinion in favour of the film for its (the final twist’s) sheer shock value.Ajay Bahl’s direction is very sensitive and effective. Had he used less English and less technical terminology, the film would have appealed to a larger section of the audience. On the whole, Section 375 will be liked by its target audience viz. the classes and the elite audience. It will, therefore, do well in the good multiplexes of the big cities.

But what saves the film is the way the court (and for once, it is good to see the judges not just as paper cut-outs but with people who want to do the right thing, and both Kadam and Desai are impressive) articulates its conclusion. Consent is imperative every single time, even between people who have been intimate before; and the wielding of power in the workplace and demanding sexual favours in exchange of career advancement is a crime. No two ways about it.

For most part if it, Section 375 keeps you confused about the possible outcome of the case, and that’s a moral victory Bahl can claim. But then he takes a stand and dilutes the whole idea of being an unbiased presenter of facts of a rape case.Section 375 is engaging and your views towards the film will depend on which side you would like to be

The film makes for a gripping watch with a crisp runtime and top-notch performances. Akshaye Khanna is intense, brooding and riveting all at once. He is simply brilliant as he owns every minute that you see him on screen. Richa Chadha follows up with an equally earnest and nuanced act. The supporting cast (Rahul Bhat, Meera Chopra, Krutika Desai) also hold their own. A special mention for Kishore Kadam who is effortless as one of the judges. Add to that, the screenplay is taut with dialogues that stand out.Overall, ‘Section 375’ is an audacious effort. It is a relevant film that tackles a complex issue and one that will engage, inform and open up debates.

The film not only provides validation to all those dismissing sexual harassment cases as having ulterior motives but also does great disservice to women, who have only recently had the courage to risk social stigma and share their stories with the world. With every clap and hoot generated in the auditorium when Khanna speaks or as the credits roll, one can ascertain the impact of Section 375 and the recklessness and shortsightedness with which Bahl has approached the subject.

The cinematography and editing serve to keep Section 375 moody and moving at a decent pace. With Gupta’s fine writing, Section 375 does not take a shrill, moralistic stand. It also does not cave to Bollywood-ised courtroom hysteria (don’t expect grand chants of ‘Milord’), sticking to a highly charged narrative that nimbly looks at both sides of the case and, ultimately, defers to the rule of law.

Ajay Bahl’s direction is quite apt. He captivates the viewers with his storytelling and doesn’t lose their attention even once in the 120 minute duration. Also, he presents both sides quite nicely and convincingly. This is a courtroom drama but like conventional Bollywood films in this genre, the film is not made in a dramatic fashion. Yes, a lot is happening in the film but it is all done a bit more realistically. On the flipside, the second half is where the film drops a bit. One expects a film with so many unpredictable moments to end with a bang. Sadly, that doesn’t happen.

A filmmaker stands trial when a costume assistant on his movie accuses him of rape.