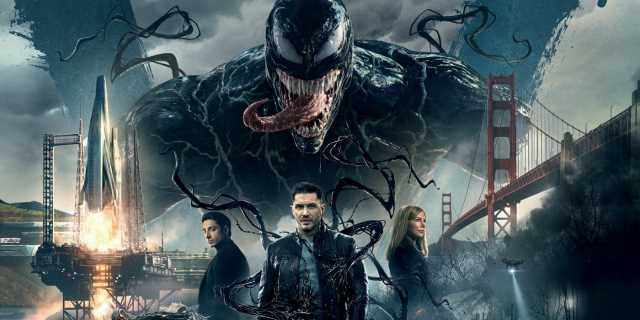 Director Ruben Fleischer tries to make this material thrilling and funny in that self-aware Deadpool sort of way. But the screenplay by Jeff Pinkner, Scott Rosenberg and Kelly Marcel has little that is inventive or original. The dialogue is painfully pedestrian – at one point, the local grocery store owner tells Eddie – Life hurts Eddie, it just does. Wow, that’s a revelation. The action includes a generic car chase and a climactic fight between two Symbiotes – it’s Venom, who has some principles versus Riot, a truly evil creature who wants to destroy the world. So even Symbiotes have degrees of good and evil. Who knew? On film, Venom was first seen in Spider-Man 3. This film is the first Sony production of a Marvel character. Needless to say Venom will return. I just hope round 2 has more bite. I’m going with two stars.

What the screenplay lacks in character development, it makes up for in at least a couple of the action scenes which are well staged and executed, save for the anti-climax when it all converges into a massive CGI blob, quite literally. All hope isn’t lost though. A mid-credits scene does enough to build excitement for the subsequent sequel, which hopefully will feature Venom being integrating into the Spider-verse. If nothing, Tom Hardy proves that he’s more than equipped to play the sentient symbiote, but in the hands of a more adept director implementing a tauter story.

Venom” never achieves symbiosis, or anything like it. But the film’s off-kilter schizophrenia gives it a madcap appeal. While Fleischer seems to have a darker, moodier film in mind, Hardy has the good sense to steer “Venom” in a more over-the-top direction, even if the movie around him can’t catch up. But it’s something to behold. Train wrecks like these aren’t supposed to be this entertaining.

Journalist Eddie Brock is trying to take down Carlton Drake, the notorious and brilliant founder of the Life Foundation. While investigating one of Drake’s experiments, Eddie’s body merges with the alien Venom — leaving him with superhuman strength and power. Twisted, dark and fueled by rage, Venom tries to control the new and dangerous abilities that Eddie finds so intoxicating.