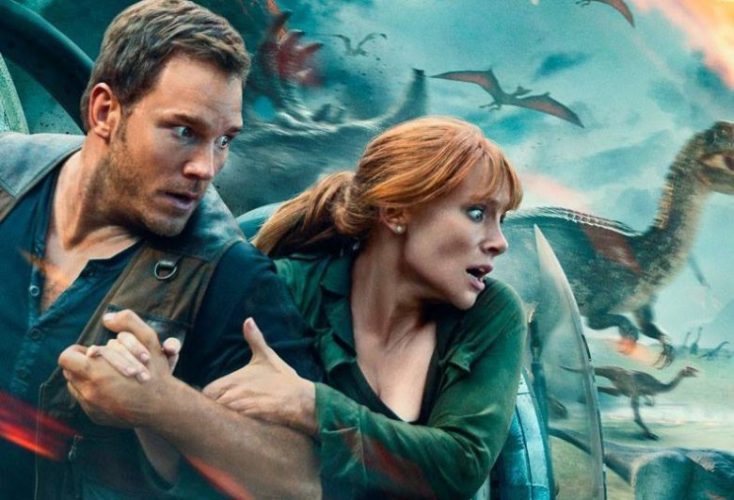 To be fair there are plenty edge-of-the-seat moments and some good jump scares in this latest entry in the dino disaster franchise. There are times – particularly in the film’s third act – when director JA Bayona treats it like a true blue horror movie with suspense and macabre imagery. But as far as story goes, it’s strictly a retread. Been there, seen that.Jurassic World: Fallen Kingdom ends with Planet of the Apes-prophecies as it sets up the third film in the planned trilogy reboot. The film delivers spectacle and scares, but never more. It’s not a complete waste of time, but go in with tempered expectations.I’m going with three out of five.

Bayona has a gift for creating layers of tension – Fallen Kingdom has some suspenseful set pieces. A sequence, in which the island goes up in flames is both thrilling and emotional – it ends with a Brachiosaurus wailing as smoke and lava envelop her. I almost got teary. But there aren’t enough of these signature moments. Mostly, the script by Colin Trevorrow and Derek Connolly, trudges along predictable beats. But Fallen Kingdom is wholly lacking in that shock and awe. The creatures, a mix of animatronics and CGI, are wonderfully tactile.

Director J. A. Bayona utilises these new rules to infuse some much-needed terror. What’s somewhat lacking, however, is the emotional connection to the story as a whole. Sure, Chris Pratt and Bryce Dallas Howard are both great performers and familiarity with their characters allow a semblance of emotional investment. But it’s too few and far between set-pieces that tend to get tedious after a while, affecting the pacing along the way. It also doesn’t help that the new characters bring little to the story and some old ones, such as Jeff Goldblum’s highly anticipated return as Ian Malcolm, are a significant letdown.

The second installment of the planned trilogy, which in itself is a reboot of the original Jurassic Park franchise, fails on every level till you realise that the entire series died a long time ago and you are just chewing on dry jerky with no juice or nutrients left.The entire treatment of the film feels so worn out that you start questioning the motives of the characters and judging their actions because one is done judging the makers for bringing the same story again and again and again (multiplied by 5)

Other than Avatar, no film has been as bafflingly successful at the box office as Trevorrow’s aggressively ordinary reboot. It was a film that charted the same route as Star Wars: The Force Awakens, but without any of the passion. Nostalgia was its only move, like an awkward uncle on the dance floor who keeps repeating the same steps because he once got whistles for them. Fallen Kingdom feels like a knee-jerk reaction to the previous movie – not once did it play John Williams’ iconic theme in its full glory, and no, the end credits do not count.

The strongest part of Jurassic World: Fallen Kingdom is the mature vision of what shall follow this movie. The kingdom is no longer just for dinosaurs on the island or for humans in the world. They will have to learn to co-habit. Because of that, it is easy to speculate that the third movie will be closer to the concept of Planet of the Apes, avoiding the extinction of the franchise. Because it is clear that audiences will flock to the theatres to see the dinosaurs. It will just be an added bonus if the story mattered too. The movie lives up to its name becoming a true thing of the world. It makes you chuckle, it scares, it entertains.

A few years from now, when you look up the words ‘franchise fatigue’ in the dictionary, you would be able to spot a poster of Jurassic World: Fallen Kingdom. This is a rare film that makes the first Jurassic World seem like the first Jurassic Park in terms of quality, which is a huge bummer since it’s directed by JA Bayona who is one of the best working filmmakers out there.

Three years after the destruction of the Jurassic World theme park, Owen Grady and Claire Dearing return to the island of Isla Nublar to save the remaining dinosaurs from a volcano that’s about to erupt. They soon encounter terrifying new breeds of gigantic dinos while uncovering a conspiracy that threatens the entire planet.