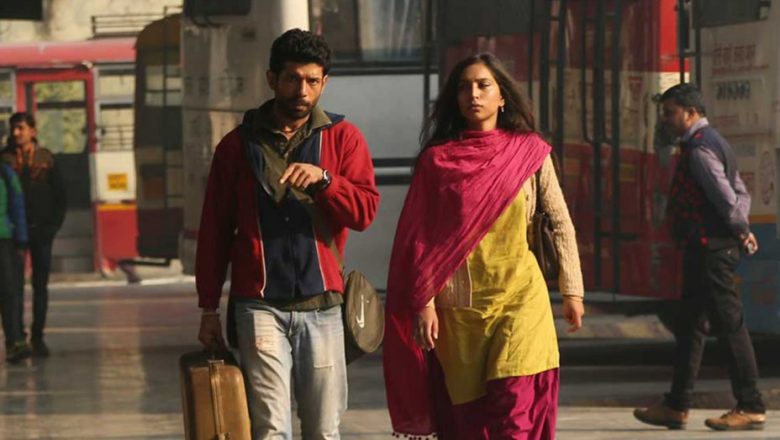 Mukkabaaz, directed by Anurag Kashyap, is a film about many things at once. On the surface it’s a ‘boxing movie’, your classic underdog template. It’s also a heartfelt love story, a ruthless revenge saga, and pretty ballsy social and political commentary about our times. At 2 hours and 35 minutes, Mukkabaaz overstays its welcome by at least 20 minutes, its narrative stretched by way too many background songs, and an inevitable sense of repetition and wallowing in the protagonist’s misery. Yet it might be Kashyap’s most accessible film since Gangs of Wasseypur, and his only crime here may be one of overreaching. I’m going with three-and-a-half out of five.

Director Anurag Kashyap who has also co-written the film, is a greedy artist. He won’t be satisfied with constructing one layer. So Mukkabaaz is also a scathing critique of corruption in Indian sport, of the caste system, which keeps worthy men in chains and of extremists who spread mayhem under the cloak of religion. It’s a love story and a sports underdog story, which in the second half transforms into a suspenseful revenge drama. It’s a lot to weave together and ultimately Mukkabaaz becomes as exhausting as it is energizing. The length, two hours and thirty-five minutes, just wears you down.

While the film’s mammoth run time (2 hours, 25 minutes!) can exhaust you a bit, Mukkabaaz is a total knockout. The not-just-a-boxing film must not be missed as it puts forth a message that’s most relevant in today’s world — Bahut Hua Samman Tumhari Aisi Taisi — #Timesup, bullies.

My worry is that many who are not fond of Kashyap’s usual complex sensibility would like this latest move: They’ll applaud the fact that he’s going for the tear glands with brass knuckles on.The tragedy of Mukkabaaz is not that it aims low; the tragedy is that it aims low and hits.

As the girl who does not have a voice but possesses a mind of her own, she uses her face, eyes and body and finger gestures to etch out a character of stunning depth. The ever-reliable Jimmy Shergill, despite the lack of nuance in the role he essays, is at the top of his game. Mukkabaaz packs a massive punch. Watch it because it is one of the more important films to have come out of the Mumbai movie industry in recent times.

Watch or Not?: Yes! Because you might just be that other guy/girl who this movie doesn’t targets but will go and watch it anyway. Its fate depends on word of mouth, be an addition!

The performances of the main and the supporting cast bring out each of the distinct characters they play. The film takes its time to tell its story the running is almost 2 and a half hours in this Festival version. But then it takes time love and fairness to fight its battles and stand up to the consuming hatred and vengeance of people with power.Mukkabaaz was screened at the opening ceremony of JioMAMI 19th Mumbai Film Festival. It will see a theatrical release on 10 November.

Hardcore Anurag Kashyap fans may be a bit disappointed with its happy ending and moreover, less of blood bath unlike his films. Though Mukkabaaz is not as dark as his genre, the overall treatment is edgy and thrilling alongside the universal appeal. The film is definitely a milder version of the director, but there is not a dull moment in the movie either. Book you tickets now!

A low caste boxer (Shravan) trains at a gym controlled by a local Don (Bhagwan Das Mishra). Shravan falls for Mishra’s niece (Sunaina). The Don does not approve of this match. Shravan strives to win Sunaina’s hand in marriage and become a successful boxer while trying to avoid retaliation from the Don