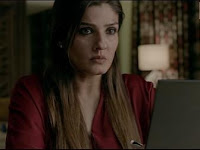 Icky intemperance is the outlining quality of Maatr, a rape-and-revenge thriller featuring Raveena Tandon in the guise of a moping mom on a killing spree. Violence against women and its repercussions supposedly constitute the film’s thematic thrust. All that it manages to be is a tediously predictable, manipulative potboiler of the I Spit on Your Grave variety sans the ‘video nasty’ tropes.

This rape-and-revenge thriller plays it strictly by the numbers: the heinous crime (involving the gang rape of a mother and daughter), the aftermath (involving unhelpful officers of the law) , the wounded woman picking up the cudgels and going after the perpetrators. The roll-out is as formulaic as they come, and sometimes that can be okay too, but a film like this needs to be deeply sensitive and alert to lift the sordidness of the material. Maatr fails on this score from the first frame, with its improbable plot-points, and relentless crassness: I cringed from beginning to end.

Where Maatr is successful is in how it approaches rape; it doesn’t trivialise the subject. It also shows well how Vidya’s husband fails to provide the unwavering support she needs. However, barring some emotionally charged scenes featuring Raveena, Maatr appears repetitive; we have seen this story several times before.

Maatr would like to believe its relevance comes from true events that headline news channels regularly, but its typically Bollywood tropes to attain justice modelled on the likes of Aakhri Raasta and Mohra is not half as engaging. Even in an out and out masala fare like Mohra, Suniel Shetty has to suffer the consequences of his actions. Crammed with glaring loopholes and stupid contrivances, Maatr’s simplistic depiction of a volatile, scarred psyche prefers to exult in unaccountable violence.

Delhi, where this film is based is often referred to as the rape capital of India. And the film’s sole intention is to serve as a wake-up call for the atrocities against women. So you applaud the intention. However, the film itself is over-dramatized account of the heinous crime and what follows.Raveena is sincere as the victim who sullies her hands to get justice. But, the amount of bloodshed, leaves you asking, what is worse. Are the images of rape gorier, or is the bloodshed of the perpetrators of the crime, grosser?

The film has its fair share of snags but what keeps the momentum going is the fact that you feel content whenever Raveena’s character succeeds in her mission. The film will take you through various emotions of discomfort, angst, outrage, cringe, satisfaction to plain meh. Despite its flaws and an uneven plot, watch the film for its compelling, hard-hitting performances and the fact that it creates a world where justice is served someway or the other.

Ashtar Sayed’s directorial debut tracks the journey of a mother seeking revenge for her daughter’s gang rape and subsequent murder. The movie is perhaps a reflection of the society and the upbringing of a huge male population who still look down upon women and treat them as mere sexual objects. The interesting part of the film is that the plot of the film is nothing extraordinary but it is the great performances, gripping subject line and apt execution that makes ‘Maatr’ a must watch.

Clearly, Maatr is not for the mild-hearted or the lily-livered and is a revenge thriller that keeps you hooked for a large part of its runtime.The true success of revenge thrillers lies in how well the said badlaa has been detailed and the extent one is willing to go to jab it to those who’ve wronged her. On that count, Maatr falls a bit short as the payback seems barely fitting. That said, the film manages to keep you guessing and hopeful about the events to follow.

Vidya Chauhan (Raveena), a school teacher and her teenage daughter Tia (Alisha) are raped, assaulted and dumped on the roadside. Tia succumbs to her injuries while Vidya survives. Since the police are dragging their feet all over the investigation, Vidya devises her own revenge strategy.