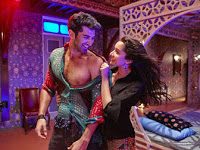 What are the chances that Ok Jaanu is a strictly okay film; nothing more, nothing less? Well pretty strong I’d say, considering that director Shaad Ali doesn’t bring much freshness to the cutesy but clichéd love story Ok Kanmani that Mani Ratnam wrote and directed two years ago.It’s also a theme that was explored just last month in Befikre, in which a young couple decides to live in without making any commitments to each other. I’m going with two out of five for Ok Jaanu – it’s a bit like flat soda. Palatable, but lacking any fizz.

OK Jaanu isn’t a bad film. It’s just a pointless one. Because an exact — and I mean frame-for-frame — version already exists in Tamil. Shaad doesn’t add anything to the narrative and the leads aren’t dazzling enough to distract us from the inherent flaws — like the repetition and predictable ending. If you want to see young, pretty people struggle with love versus career, find the subtitled O Kadhal Kanmani on Netflix. Or, better still, seek out La La Land.

The film settles into a monotonous rhythm because it is absolutely clear from pretty early on exactly which way the wind will eventually blow. One of them suggests to the other that dil ka kaan pakad ke rakhna chahiye (one must hold the heart by its ears). It’s a diktat that the duo struggles to jettison as love takes its course. Parts of their story are interesting, but never exhilarating. Verdict: OK Jaanu is watchable because it does occasionally touch both the heart and the ear. But it is never able to shrug off the fluff that clings to its body.

On the whole, OK JAANU is a decent love story which works only in parts mainly because of the chemistry between Aditya Roy Kapur and Shraddha Kapoor. At the box-office, the film will mainly appeal to the youth, as it makes for a decent date movie.

OK Jaanu is an extremely entertaining film. Adi and Tara’s chemistry will make you feel young and want to fall in love once again! This film is a must watch for all romantic souls! The film is overall entertaining. Go for it if you want to leave the theatre as a happy soul.

The official remake of Mani Ratnam’s Ok Kanmani tries for everything that a winsome romance should have: good–looking young couple, perky dialogues, song-and-dance, picturesque locations. Ratnam’s pass at young love in Chennai was a hit, but wasn’t a great film, even though Dulquer Salman and Nithya Menen played really well together. Shaad Ali’s copy Ok Jaanu, with a screenplay by Ratnam, is faithful but pale and predictable.

In spite of its Pros, one can’t deny that unsure young lovers and their battle with commitment phobia is a tired topic to begin with. Moreover, if you’ve seen the original Tamil film, it’ll get tedious after a while, knowing exactly what’s coming next. If you haven’t seen the original though, you’re sure to walk out of the theatre with a warm-fuzzy feeling.

Ok Jaanu is an easy breezy watch without any major crisis. The characters have depth…that of my morning masala chai. The story has layers…that of my lachcha paratha. There’s hardly any dilemma, any major cross roads that lead to any soul stirring, damn-I-can’t-decide- moment! Ok Jaanu doesn’t convince you with the couple’s fear against marriage. Neither does it showcase real career problems. The parents and family are also such boring cardboard characters. You can see the climax well in advance but can hardly see any logic or reasoning in their change of hearts.

Shraddha and Aditya bring to life the chemistry that we adored in Aashiqui, so that definitely works in favour of OK Jaanu. What doesn’t is that it’s eerily similar to last year’s Befikre. Not just in terms of theme, but also that plight of two capable actors having nothing to work with other than cliched scenes about live-in complications. Such things are glossed over and traded in for a make-out fest in the first half of the film and a feelings fest in the second half.

Well, OK Jaanu will be a treat to Shraddha and Aditya fans. If you are a sucker for romantic films or then easy movies then you wouldn’t mind spending your two hours and fifteen minutes in the theatre for this one.

Shaad Ali’s directorial OK Jaanu is a sweet love story. But of the saccharine kind. It’s disappointing to see a man of Mani Ratnam’s calibre pen a story that loses its plot as it keeps presenting the same thing over and over again in slightly different settings. Yes, we get that Adi (Aditya Roy Kapur) and Tara (Shraddha Kapoor) are discovering their feelings for each other and the song and dance in the rain is all necessary. But Ali could have easily established that in three scenes rather than using the entire first half of the film — and then carrying on the humdrum after the interval.Moreover, Kapur and Kapoor are nothing like the ardent lovers from Aashiqui 2. The spark we witnessed between the actors in the other film seems to have been doused by the rain in this one. Keep this one for the television premiere.

Adi is a young game designer from Lucknow who dreams of emigrating to the US and living the American dream. At a chance encounter during his friend’s wedding, he meets Tara. She is a recent architecture school graduate working in an architecture firm. She dreams of going to Paris to pursue higher education. The cheerful banter soon gives way to a conversation where both Adi and Tara realize that they strongly feel that marriage isn’t for them and move in together until the time they go their separate ways when career comes calling. With only 10 days left and parting imminent, Adi & Tara are forced to confront some matters of the heart.