There’s never a quiet moment and virtually no time to pause or reflect in the speeding bullet train that is Dishoom. Good call. The film is crammed with childish humor, expensive set-pieces, gratuitous songs, and cheeky cameos.  You won’t remember Dishoom for its plot or for its performances. It’s like junk food that’s meant to be savored in the moment, but cannot be counted on for nutrition. At two hours flat it’s that rare masala film that doesn’t overstay its welcome.I’m going with three out of five. I was entertained.

Rohit Dhawan’s direction is lovely. For one, he has adopted a narrative style that is fast-paced and that suits an action-packed thriller. Secondly, his casting is very nice and he has extracted fine performances from his actors. On the whole, Dishoom will emerge victorious at the box-office. The entertainer will keep its producers, distributors and exhibitors happy.

Dishoom is a silly but fun reworking of the time-tested buddy cop formula. If you don’t ask too many questions – especially in the outrageously illogical second half – you can have a pretty good time. Director and co-writer Rohit Dhawan isn’t aiming for anything more. It’s slick, seductive, disposable entertainment.And the icing on the cake is a laugh-out-loud cameo by Akshay Kumar in a manbun, who gets our boys to strip to their trunks.

Not that there are too many nail-biters – with its careening plot, Dishoom doesn’t fulfil the promise of a taut thriller but its mad, zany moments make up with entertainment. The film evokes 1990s hits, from Main Khiladi Tu Anari to Govinda’s many friendly leers – presenting a new-age masala movie, full of choppers, chummas, cheetas, cheese-bhara lines and spicy dishooms. But as an entertainer, Dishoom delivers. If you’re good with laughter, not logic, Dishoom is actually two much fun.

Whole lot of noise and bluster, if one discounts the stylish mounting and sparkling cinematography. The audience sits through the cacophony hoping for a genuine knockout blow to be delivered somewhere down the line. It never materialises. Dishoom doesn’t land a single half-decent punch.

The film is clearly aiming for laughs, and even when it gets lost along the way, blindsided by some unnecessarily elaborate action moment or by a bicepped un-actor, it still provides a fair bit of corny fun.The film’s best parts are Dhawan asking a helicopter pilot to pull over ‘side mein,’ or Satish Kaushik trolling people on the phone.If Dishoom does well, however, I do hope they’ll avoid John in the sequels — all this film needed was a cop out.

The film as a whole. It comes alive only in bits and pieces: Akshay Kumar’s cameo, for instance, as a pouting-selfie-clicking man bun is a hoot. Some of the Abraham-Dhawan bro-time is okay too, but borrows from the ‘Men In Black’ duo Tommy Lee Jones and Will Smith in the way they, Kabir and Junaid, go about addressing each other, yes, K and J.

But what makes the movie strictly average is the core idea. From Rush Hour to Central Intelligence, a number of buddy cops films have already used it. But, to give the credit where it’s due, Dishoom still entertains. The relatively short length of the movie (124 minute) helps Dishoom rise above the clichés. It’s a formula potboiler that serves the purpose of entertainment if you’re looking for some light moments.

Dishoom’s slick editing, intercutting, overall packaging and presentation help it sail over the weak screenplay. Rohit doesn’t have much of a story here too so he fills the holes with some enjoyable thrills and action. Dishoom is a full-on masala entertainer clearly aimed at the young generation. Despite the potholes, Dishoom is a fun for most part. Watch it for the John-Varun bromance and Akshay Kumar’s outrageous cameo.

The only thing which bothers is the fact that a lot of stuff happens while you still try to figure out the scene. But maybe that’s because the entire film runs on a 36-hour-long deadlock. Be ready for many highs but do not think on ‘how is it possible?’. Do not forget, it’s Bollywood and nothing is impossible. Go ‘Dishoom’ for a weekend blast!

Rohit Dhawan’s ‘Dishoom’ is sleek and a stylish film with their lead actors Varun Dhawan (Junaid Ansari) and John Abraham ( Kabir Shergill) on cruise mode. The story very mysteriously unfolds the kidnapping of India’s top cricketer Viraj Sharma before a crucial match in the Middle East. This is an out and out pot boiler film which does have its moment where logic can be questioned. But as long as the film keeps you entertained, it won’t hurt watching this film.

Rohit Dhawan’s film is high on style but extremely low on content. Laden with cliches, this script is poor. Watch or Not?: Dishoom is a predictable film with funny elements. If you can keep your brains aside and enjoy a film that is high on swag, this could be your pick for the weekend! As far as buddy cop films go, Dishoom is partly enjoyable. Varun Dhawan is entertaining and the only highlight other than the action in the film.

First things first. DISHOOM’s script (Rohit Dhawan, Tushar Hiranandani) is predictable, however the chemistry between the actors, especially during the comic scenes make for an entertaining watch. On the whole, DISHOOM has a predictable storyline. However, the engaging narrative, coupled with rich visuals and high octane action work in the favour of the film. Add to this the star power of John Abraham and Varun Dhawan which will definitely attract the youth. At the box office, the film faces no competion for next two weeks and hence it will ensure good returns to the makers.

While the first half is engaging, the second half is ridden with cliches and corny twists. A sight for the sore eyes was the bromance. As far as buddy-cops go, they are cute together. They have an impish charm about them, but it’s painfully predictable. What holds up Dishoom, filmed extensively in the UAE, are the two A’s: action and Abu Dhabi.The focus is on Abraham and Dhawan, the two swashbuckling heroes. But it would have been great if there was more to them than just style and swagger.

When India’s top batsman goes missing in the Middle East, two cops from either side of the Arabian Sea team up for a 36 hour manhunt. 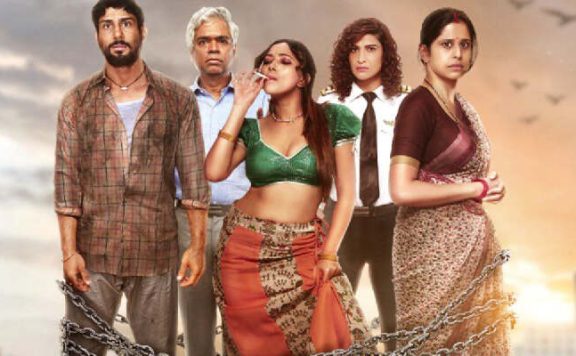