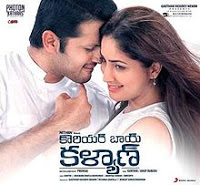 When a director comes up with concept based story, he has to have a screenplay that can make the audiences glued to the seats till the end. When the narration goes on plain mode without any twists, the audiences lose interest in the mid-way itself. Case in example is Courier Boy Kalyan that is told in predictable narration wherein we can tell the next scene and it ends exactly the same. Although it begins fairly in a interesting way, soon it drifts into regular movie style.

Plus points are Nithin, basic plot and a couple of thrilling episodes in the second half. The romance thread in the film offers no freshness. Though the length is 104 minutes, there is still a need to edit songs and a few irrelevant comedy episodes. The screenplay should have been more arresting. On a whole, Courier Boy Kalyan is an attempt to blend in family elements and romance to an interesting thriller story.

Predictability is another big problem for this film that never throws any surprises at any point. Nithin’s presence and the short runtime are the only plusses in this otherwise boring movie that doesn’t take itself seriously. A huge disappointment for the audience who go with expectations looking at the names like Gautham Menon associated with it. You can wait for the Courier to be delivered at your home rather than running to the theaters.

When you try to induce unnecessary commercial elements in a very interesting and engaging concept, the result is Courier Boy Kalyan. The film which could been a decent thriller is seriously obstructed with the arrival of songs and a hurried up climax. But a breezy first half, and some engaging thrills salvage the film which ends up as just an ok watch.

Synopsis: .It is a Remake of 2012 Hollywood movie Premium Rush