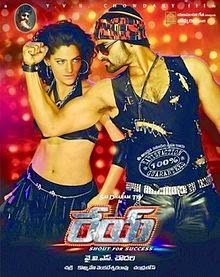 The film has been in the making for a long time but does not disappoint those who prefer to watch films that are appreciative of the lead character showing off an “attitude”. Quite a few cinematic liberties have been taken and the length of the movie is prolonged unnecessarily. The die-hard Tollywood audience might want to lap up this movie, despite some silly stuff which the comedians produce.

It is pretty tough to control your child and likewise YVS finds it hard to trim his film and that’s where he loses. Had he told the story in a shorter format and with more pace, it would have surely worked at one level. But Rey is stretched to the extent that it becomes tedious watching by the time climax happens.

Rey has nothing to be talked about except the efforts Sai Dharam Tej has put in. We don’t know if Rey is really a shout for success or not, it surely is a Shout for Exit from audience in the theaters.

With Rey, Sai Dharam proves that he has the talent to go a long way. An interesting backdrop, climax and Sai’s dances are the basic assets of this film. On the flip side, lag in narration and excessive length spoil the flow of this film which is aimed only at the youth. .

Director Y V S Choudary’s Rey is a mushy musical drama which is amateurish and disturbingly inane. Though Rey is just about 168 minutes long, it requires real patience to sit through this ordeal. If anything is surprising about this damp squib, it is the audacity of those behind the movie to present this musical before the viewers. Rey narrates a story that is too simple and is a potpourri of some tasteless scenes. Adding some visual effects and loud background scores barely makes it even remotely entertaining. All-in all, a sequence of illogical, mind-bogling, silly, unnecessary scenes make Rey a movie you can happily miss. Certainly a brute remark. But then, the movie doesn’t show you any lenience.